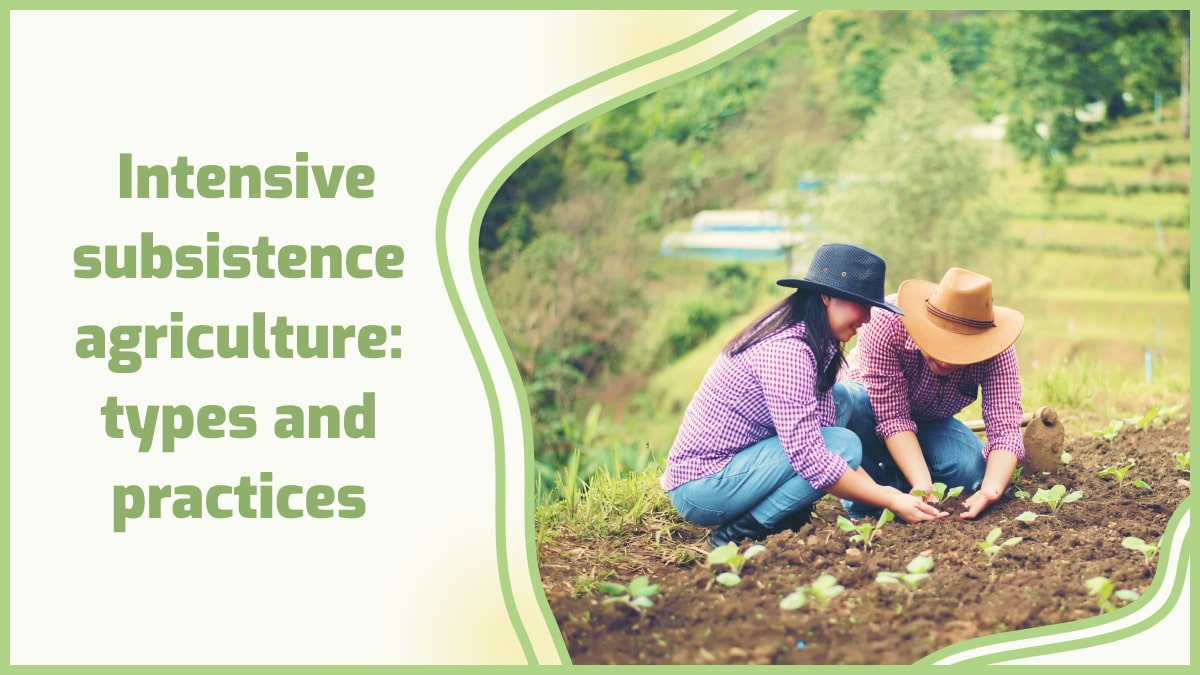 Under subsistence farming, farmers produce just enough crops and/or livestock that are required for their own needs and do not have the option to earn money by selling or obtaining goods by trading their production. While most of the food on our plates today comes from large-scale farmlands spread across hundreds of acres, subsistence farming is still prevalent in many parts of the world and mostly in developing or under-developed countries of Asia and Africa.

When humans first began growing crops instead of foraging for food, the foods they grew were entirely for self-consumption and thus, in a way, subsistence-farming was the first form of agriculture that led humans to settle in one place. When trade started, humans began to shift from subsistence farming to commercial farming thereby selling the surplus amount of what they produced in exchange for other necessities. However, as the human race evolved and the human population exploded, thanks to the increased food supply through farming, land available to a farmer became limited. In the current agricultural system, companies hold vast areas of farmlands while farmers with limited land do not even have enough to meet their own needs. So farmers have been finding ways to intensify their farming practices to increase production. This form of farming is now known as intensive-subsistence farming.

It is called primitive-subsistence farming because it follows an approach called ‘shifting-cultivation’ or ‘slash and burn technique’ similar to our primitive ancestors. Under this, patches of land from forests or grasslands are cleared by felling the trees, burning with fire, and preparing the soil. The land is used for a few years until its fertility runs low, at which point a new area is cleared and farming is shifted to that location. Moreover, as shifting cultivation has gradually reduced due to its negative impacts on the environment, primitive-subsistence farming is still present in other forms such as homestead farming in which small gardens or tiny plots of lands are used to grow vegetables and crops using the manures and bio-waste produced by the farmer as fertilizers.

Intensive-subsistence farming however mainly results from a single cause, that land is limited. And as land is passed on from one generation to the next, it is fragmented into smaller plots to divide among the offsprings of the farmers. So it goes on getting smaller and smaller until it cannot produce enough to even satisfy the needs of a single family and the farmer uses intensive practices to fulfill production.

In which areas is Intensive-subsistence farming practiced?

For an area to have intensive-subsistence farming, it has to have suitable conditions in terms of light and rainfall. The location should have continuous sunlight coverage most of the year and should have a significant monsoon season. Checking both those requirements, the monsoon parts of Asia in countries like China, India, the Philippines, and many parts of South East Asia are renowned for their practices in intensifying their farmland production.

Many rural areas of China have hills beautifully carved into terraces that grow different varieties of crops all year round. The need for intensifying agricultural production comes from having a higher population.

In more developed countries of Europe and America, intensive-subsistence farming is often practiced in the countryside households having small landholdings and is not uniformly distributed to a certain place.

What are some characteristics of intensive-subsistence agriculture?

The small size of the landholdings of the farmers is the primary feature of the intensive-subsistence agricultural system. The entire arable land will be subdivided into numerous small plots of lands each belonging to a separate farmer. As a result, they are managed separately by individuals trying to produce just enough to feed themselves. This becomes very uneconomic to run since you can’t afford any inputs on the farms due to the lack of capital. Depending on the location, the average size of the land can vary anywhere from a quarter of an acre to a few acres i.e. (0.25 – 10) acres.

The intensity of farming can be seen both in temporal and spatial terms in the farms. What it means for the land is that as much area of it as possible will be used for farming leaving only a few ridges as footpaths in the plains and tightly packed terraces will be constructed in hilly areas. Even marginal lands like swamps and dry lands will be made arable by draining the water and irrigating the land respectively. Also, the land will not be left barren at any time of the year with a new crop replacing the previous one as soon as it is harvested. Other intensive techniques like multi-cropping on several layers are also often practiced.

Much hand labor is entailed

A farmer practicing intensive-subsistence agriculture will always try to use hand labor as much as possible rather than using machinery and power tools to keep the costs low. The general understanding is that machines cost money while their own hands don’t. So even though tractors are available for tillage, they gravitate towards the old methods of using animals like buffaloes and handmade wooden plows and spades. Harvesting is also done using sickles as are all other post-treatments according to the crop. In fact, Intensive-subsistence agriculture is identified as having very low production per labor and high production per land. However, as technology progresses, the machinery is getting more affordable, and intensive subsistence farmers in some places like India, Japan, and China are starting to hire machines whenever accessible and affordable.

Use of animal and plant manures

The use of animal and plant manures as a characteristic of intensive-subsistence agriculture is also related to the lack of money to afford chemical or artificial fertilizers by the farmer. But this is a good thing since bio-fertilizers made from kitchen waste, human excreta, farm waste, plants, and animal dung doesn’t affect the soil and the environment. So this is one of the good aspects of this form of farming practice since even though it puts pressure on the soil and land, the addition of nutrients in the form of manures and bio-fertilizers tries to balance it out.

However, like machinery, chemical fertilizers have increasingly become affordable to most farmers due to reductions in prices and government assistance. As a result, in many parts of the world, the tables have turned and intensive subsistence agriculture is now recognized for its excessive usage of harmful insecticides, pesticides, and fertilizers to maximize output. This compromises the sustainability of the farm. So the use of animal and plant manures should be promoted which makes the farm self-sustaining and ensures food security to the farmers.

The dominance of paddy and other food crops

While paddy is the most grown crop in the intensive-subsistence agricultural system, several other food crops are also extensively grown and they vary according to location and its climate, soil, and topography. For example, wheat, soybeans, and barley are majorly grown intensively in subsistence farms of northern parts of china, japan, and Korea and also parts of India like Punjab. In areas where rainfall is not adequate, food crops like millet and gorghum are grown. Maize is also often included in the crop rotation at one time of the year. Peas and other vegetables are often integrated with plants like maize.

Lack of Credit Services for Farmers

Farmers are often faced with financial difficulties in these systems of farming, especially because of the lack of financial services and credit facilities. This is because intensive-subsistence farming is mostly rainfed which makes it susceptible to failure. Moreover, since no surplus remains of the production for selling, there is no way for farmers to repay their credit if they have no other source of income.

The concept of precision farming comes down to the scale of variability that exists within a plot in terms of nutrient availability, soil type, moisture, topography, and other factors. It has been noted that variability can occur in very small plots.

The technology which has driven precision agriculture is becoming more widely accessible. The Soil Data Analytics and Yield data service offered by GeoPard is one such example of a sophisticated and capable precision agriculture tool being accessible and affordable even on farmlands owned by several small landholders. It helps to discover the promising combination of agricultural and technological fields and improve agronomic decisions of small farmers so that their subsistence need for food can be ensured and the intense stress on their lands can be reduced to ensure sustainability.