Multi-layer Farming and its Benefits 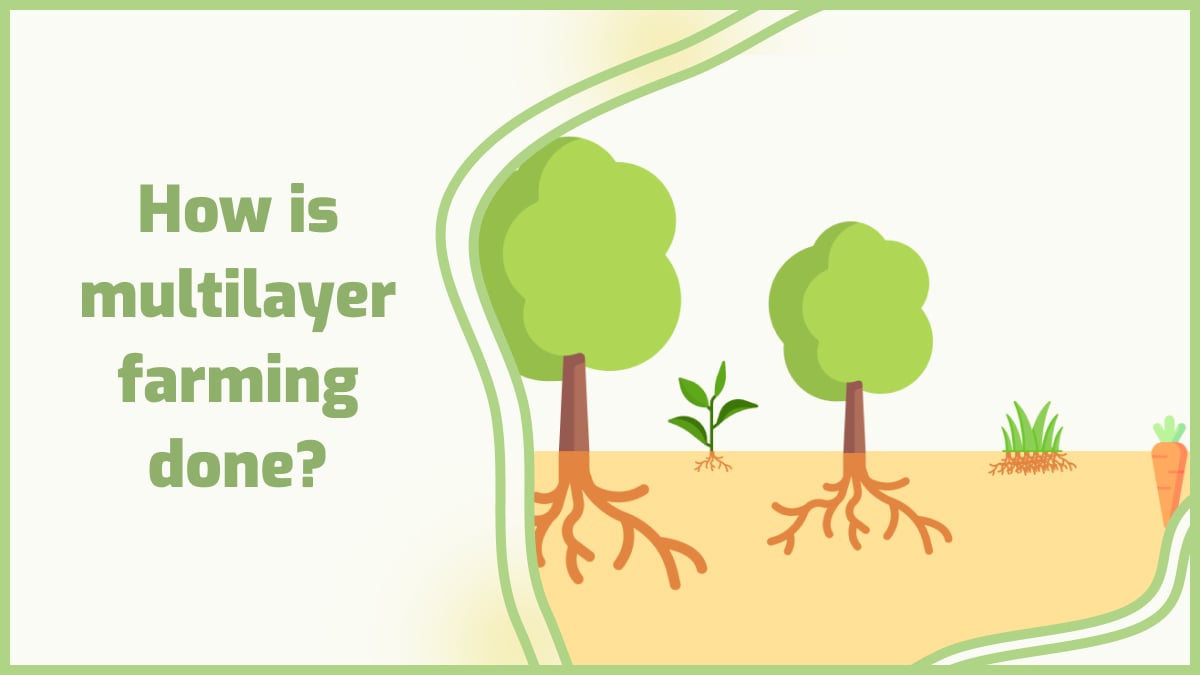 Multilayer farming is the process of growing multiple crops in a single field. This is done by planting a crop on top of an already existing crop. The first crop is then harvested, and the land is used to plant another crop. The purpose of this is to save space on land and improve efficiency. It is an ancient method of farming that is used to increase crop yield and avoid competition between plants.

Multi-layer farming is a type of polyculture that involves growing multiple crops in a single area. It generally involves growing plants at different heights, so that one crop grows on the ground and another grows above it.

Multi-layer farming is a kind of agricultural method that is used to optimize the use of land and improve the quality of the soil. The main idea of this kind of farming is to plant different types of crops in one field, and then use the remains from each crop as fertilizers for another. For example, you might grow lettuce in your vegetable garden and also plant tomatoes on a trellis above. Multilayer farming models work best when there is a short growing season like during the fall or winter months when temperatures are cooler and the sunlight is limited.

Some of the benefits of multi-layer farming include:

Multi-layer farming may involve planting different types of plants at different times in the same field during one growing season. For example, a farmer may plant vegetables on top of a bed that was previously planted with potatoes, then harvest them both at once for sale as mixed vegetables or frozen fries. This method can be used in conjunction with companion planting or intercropping (also known as mixed cropping) to further increase productivity and reduce pest damage while also improving soil fertility.

Multi-layer farming is an efficient and sustainable way to grow food that can help you cut down on waste and use resources more efficiently. It allows you to grow more food in less space and use fewer chemicals. It also helps with pest control, by alternating plantings so that pests do not have time to build up their populations.

Multi-layer farming is also called intercropping and polyculture because it involves multiple types of crops being grown together. While there are no hard and fast rules about what makes one type of crop a different layer than another, the idea behind multi-layer farming is simple: different plants have different needs, so by combining them in one space you can make each type of plant thrive.

It’s a technique that can be used to increase the productivity of small plots of land, by growing different crops in layers that can be harvested at different times. Multi-layer farming can be used with any type of crop, but it’s most common for subsistence farmers who have limited resources and land available for planting. The practice has been around for centuries, but it’s gaining popularity as more people are realizing its potential benefits.

In multilayer farming, the first layer should be made up of plants that can tolerate low levels of light and will grow quickly in this environment. These plants can be used as food for the fish or they can be harvested before the next layer is put down. The second layer should contain plants that need more light but fewer nutrients than the first layer. These plants will grow slowly but will not compete with the lower layer for nutrients because they are not competing for light at all.

The third layer should contain plants that require high levels of both light and nutrients and need to be harvested early so that they don’t use up all the resources needed by other layers further down the system.

The basic principles of multilayer farming are:

On a long-term basis, agriculture resources and the environment must be sustainable. This system consists primarily of an overstory of trees or shrubs with a forage or economy crop understory. The gap between trees can be large enough to allow enough light to reach ground cover.

What is the benefit of multi-layer farming?

The benefits of multi-layer farming are many. They include:

Growing several crops together increases yields because their roots fertilize each other and because more plants are working together to produce more food.

Many crops grow faster when they’re grown together, especially if they’re planted close to each other and watered regularly.

Because weeds compete with crops for water, nutrients, and sunlight, they tend to crowd out slower-growing plants when they are allowed to grow unchecked by human interference (weeding). But if you plant fast-growing plants among slower ones, you will have fewer weeds overall.

Pests prefer certain kinds of plants over others — so planting a mix of different species reduces pest problems overall by making it harder for them to find their favorite foods.

Multi-layer farming helps increase biodiversity because different types of plants are grown together in one space. This provides an ideal habitat for birds, bees, and other insects that contribute to pollination and other ecological processes necessary for maintaining healthy ecosystems.

The cash flow is maintained by multilayer farming. Farmers can maintain financial viability throughout the year by growing different crops.

It also employs a large number of people throughout the year.

It also helps to mitigate the effects of severe rain, landslides, and soil erosion.

The likelihood of crop failure is minimized as a result of multiple cropping.

Planting different types of crops together in one field allows us to use them as natural pesticides by using their roots as barriers to keep pests from going inside our fields thus protecting your crops from being eaten away by them during their growing stages.

Planting different types of crops together in one field allows us to use them as natural pesticides by using their roots as barriers to keep pests from going inside our fields thus protecting your crops from being eaten away by them during their growing stages.

Here are the steps that are taken to perform multi-layer farming:

Different crops are chosen to grow. Crops must have varying heights and maturation periods.

Geometrical shapes (Square and Rectangle) are thought to be suitable terrain for multi-tier farming. Tillage, FYM addition, and composting are all examples of operations that should be carried out. With the help of tillage, a healthy seedbed is formed.

A high-quality seed of various crops is chosen. A pure, healthy, vigorous seed with a high yield potential is ideal. Seeds are disinfected to protect them from seed-borne or soil-borne illnesses.

Irrigation is when water is applied to crops artificially. Irrigation is one of the most crucial factors of plant growth. It is critical to meet the requirements for transpiration and photosynthetic activity. Water is used to dissolve the nutrients that are present in the soil. Irrigation is especially important in multi-layer farming. Neither too much nor too little water is provided. The use of a moderate amount of water is often preferred. For irrigation, the ring basin approach works well.

5. Addition of manures and fertilizers

Manures and fertilizers are used to ensure that crops grow and develop properly. Different crops necessitate various levels of nutrients. As a result, the basal approach is most commonly used. For crop growth, FYM, compost, and NPK are critical.

Weeding is done in the field to eliminate undesired vegetation. In multi-layer farming, hand weeding, hoeing, and sickling are effective weeding methods. Weedicides can be used instead to eliminate weeds. To kill pests and insects, insecticides and pesticides are utilized.

Beneficial parts of crops are removed and stored in a secure location.

For-profit, the materials are packed and sold on the market.

Below are examples of crops based on multi-layer farming:

Multi-layer farming is a sustainable method of producing crops. It involves having crops on various levels of soil, which allows them to be harvested at different times during the year. Multilayer farming strives for the most intensive and effective use of available resources. It emphasizes maximum crop productivity with minimum nutrient handling and infrastructural costs.

Multilayer farming is beneficial to the farmers and it has multiple benefits. From providing nutrients to crops, less water needs to be used, growing plants faster and protecting them from pests are some of its benefits. This farming system can be done on both small and large scales.

With the cloud-based analytics powerhouse for Precision Agriculture you can easily make data-driven agronomic decisions:

GeoPard provides digital products to enable the full potential of your fields, to improve and automate your agronomic achievements with data-driven precisionAg practices.

Learn more
Whats
Get the latest news
from GeoPard