Blog / Whats / What are the benefits of no-till farming?

What are the benefits of no-till farming? 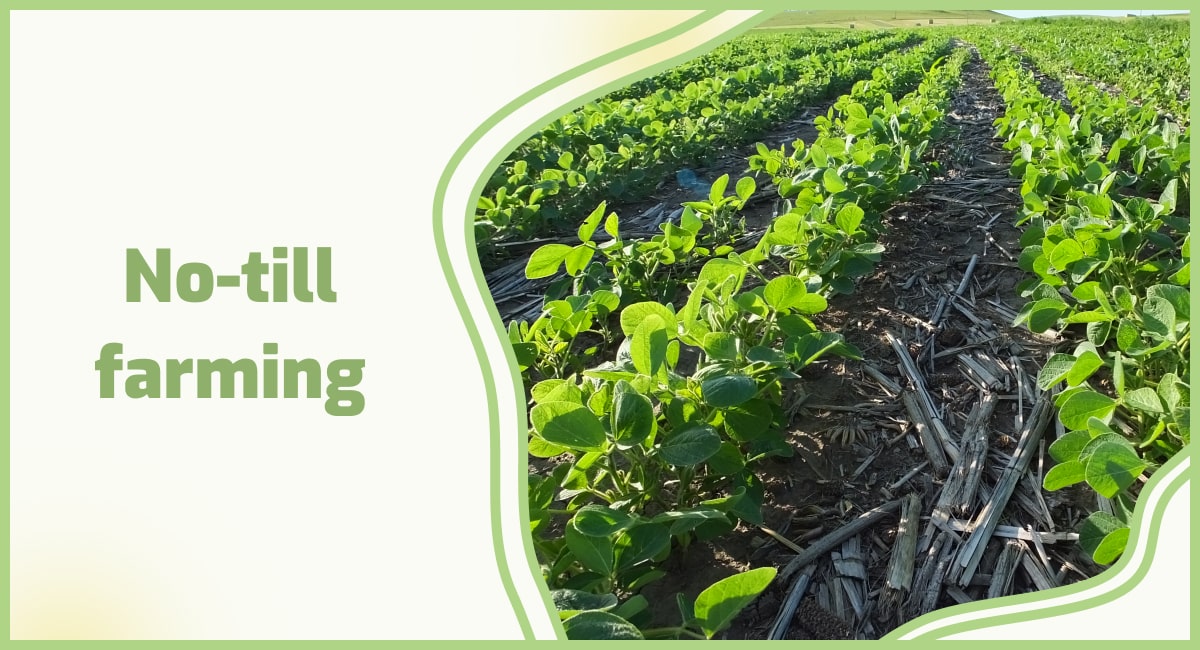 Preparing for planting involves different practices to ensure smooth and easy cultivation of crops. Tillage is one of the land preparation practices in farming that involves the process of turning over the soil, thereby burying plant residue, weeds, and pests in the soil. This practice was adopted during the agricultural revolution thousands of decades ago. Even though this practice was adopted to ease the planting of seeds as well as control weeds in the soil, it comes with several other disadvantages which make the ancient no-till method a better option when preparing the land for planting. There are several reasons to employ no-till farming which include.

How do we do no-till farming?

No-till farming is a system of farming where the land is not overturned when preparing the soil for planting. This practice is contrary to the common practice of farmers when preparing the soil for planting. Contemporary farmers till the soil for several reasons. These include aeration of the soil, controlling pests and weeds, and also warming the soil. The disadvantages of land tilling include erosion, loss of soil moisture, the release of carbon dioxide into the atmosphere leading to global warming, and the list goes on. The benefits of no-till farming include:

The no-till method of farming is often accompanied by other methods such as crop rotation which makes washing away the topsoil difficult. Unlike the tilling method that exposes the loose soil and also makes it bare making it an easy target for wind and water erosion.

This method prevents erosion which does not only wash the topsoil but also fertilizer or herbicide which causes pollution to large water bodies after contact. The pollution of the water can result in the death of organisms in the water

Maintaining the natural habitat of an organism

When preparing the land for planting there are several practices involved starting from the clearing of land to the actual planting of the seed. Practicing organic no-till farming eliminates the time spent on tilling the soil during the preparation and makes the overall process much faster.

The cost of tilling the land by acquiring tools and machines needed is reduced as well as the cost of fuel for running the machine. This reduces the cost of farm production resulting in more profit.

The manpower required to carry out the land preparation process is reduced since a whole process has been removed. The cost of paying for the labor is also reduced leading to an overall reduction in the cost of farm production

The topsoil and plant cover prevents evaporation of water from the soil, which helps retain and increase the effect of irrigation due to high infiltration. The cover plant also serves as mulch for the soil by preventing direct exposure to sunlight leading to evaporation.

● Covering the soil
If you are willing to adopt no-till farming, it is important to always ensure your soil remains covered, this is to prevent evaporation as well as encourage the activities of microorganisms in the soil. The topsoil is very sensitive and direct exposure to the sun or other harsh conditions can result in cracking or compacting the soil. Ensuring the soil moisture is not affected is necessary for healthy and fertile soil.

● Occultation
This involves the covering of soil using clothes or fabrics. The term occultation is a French word that refers to ‘hidden’. The fabric allows the air and moisture into the soil, which is important for the survival of microorganisms and also the decomposition of microorganisms. It also serves as a screen from the sun that can affect the germination of weed seeds. This soil covering method is done for about two months and requires little to no labor.

● Sheet mulching
It involves covering the soil using nylon, cardboard, amendment, mulch, and compost. The first layer comprises the amendment followed by cardboard, mulch, and finally the compost which makes the final layer at the top. This method is labor-intensive but can be done within the space of four weeks and the planting can commence on it. If you are planning to practice no-till farming the following are the step-by-step guides to follow.

● First, get your soil tested.
This will provide you with information on the soil analysis comprising the soil ph level and presence of micronutrients. You can also check online for labs that carry out the test and also on the procedure of getting your soil sample.

● Get the amendments based on your requirements
● Cut down the grasses, cover crops and weeds leaving plants debris and roots
● Add the amendments followed by the compost
● Cover with fabric or mulch sheet based on the method you are using
● For sheet mulch, you can plant after some weeks and for the fabric, leave for about two months before planting.

The process of farming starts with land preparation and the methods which enhance the fertility of the soil should be given utmost consideration. No-tilling farming ensures that the health and fertility of the soil are maintained by ensuring an increase in soil organic material. The several benefits of no-till farming also make it a better choice than tilling the soil which predisposes the soil to various harm such as erosion, loss of soil moisture, and reduction in the activities of the soil to mention a few. Adopting no-till farming helps maintain the soil and prevents the soil from losing its fertility as a result of tilling In years to come.