Blog / Whats / What are the benefits of regenerative agriculture?

What are the benefits of regenerative agriculture? 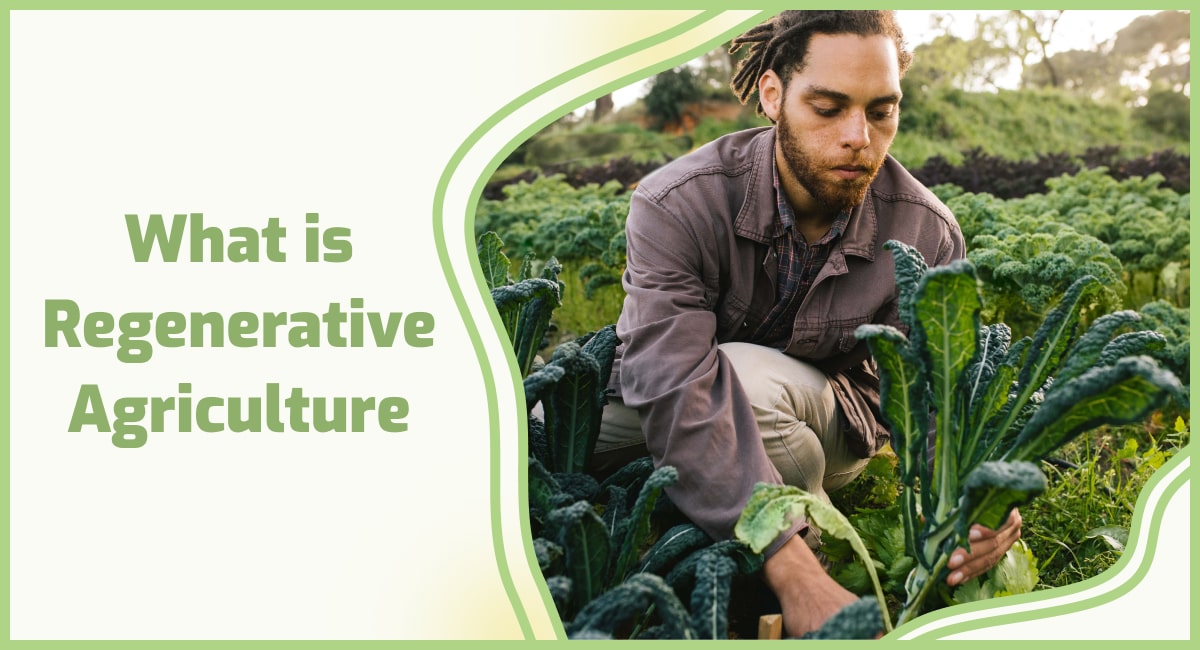 When we think of agriculture, we can only think of the romantic image of a farmer who takes care of his land with passion and dedication. Yet, as widespread as this image is, the modern reality is very different. In fact, most of the crops take place in an intensive farming regime, where the figure of the wise peasant is only a very distant memory. Hectares of fields exploited relentlessly, extensive use of chemical fertilizers and pesticides, impoverished land, deforestation, monocultures, and high CO2 emissions, this is what is mainly happening today.

Regenerative Agriculture is becoming an increasingly widespread and appreciated model by consumers. Unlike other techniques, it has very distant roots in time. In essence, it is an evolution – and extremization – of organic farming. The aim is not to exploit the land; instead, the aim is to recover its fertility by combining ancient techniques and modern technologies, acting on minerals, the organic part, and microbiology, and reactivating the natural cycles.

What is Regenerative Agriculture

By regenerative agriculture, we mean a set of practices, customs, and knowledge that aim at the production of food to meet the needs of man, while trying to ensure the lowest possible environmental impact and at the same time regenerate the fertility of the soil. It is therefore the opposite paradigm to intensive agriculture, where production is maximized even at the expense of soil fertility, with great environmental costs. The goal is to protect and enrich, rather than impoverish, natural resources.

Regenerative agriculture does not arise from a precise theorization. Although in recent years some non-governmental organizations have drawn up the principles of the so-called AOR (regenerative organic agriculture). Rather, we are talking about a set of practices applied for decades, mostly derived from the Australian permaculture of the 70s, from organic farming and biodynamic agriculture. However, the latter is deprived of its most esoteric part.

The role of climate connection

Healthier soil means more CO2 is extracted or sequestered from the air, which is good news for the climate crisis. Soil – or at least healthy soil – contains a large number of diverse microorganisms, which work in exchange with the plants that grow in the soil. Plants absorb carbon through photosynthesis, which they use to grow, and the excess carbon is transported to the soil, where it turns into organic matter.

This carbon feeds fungi and various microbes in the soil, which in turn supply plants with the nutrients they need. It is a perfect balance, but one that is altered by intensive conventional farming methods. By moving to a regenerative approach, some proponents argue, the sector would have to cut as many emissions as the land would be capturing more CO2.

A climate NGO that explores and promotes solutions to climate change, argues that “regenerative agriculture improves and maintains the health of the soil by restoring its carbon content, which in turn improves productivity, just the opposite of what conventional farming does. They calculate that regenerative methods could sequester between 14.5 and 22 gigatonnes of CO2 by 2050.

However, estimates of how much CO2 could be captured through soil carbon sequestration vary among experts. The World Resources Institute (WRI) states that the feasibility of expanding regenerative agriculture to large areas to increase climate change mitigation is still unclear, due to limited scientific knowledge. Instead, they propose a set of 22 solutions for agriculture to tackle its emissions, classified and focused on a ” five-course menu” namely:

The principles of Regenerative Agriculture

As it is easy to guess, regenerative agriculture aims to enrich the soil, the environment, and man rather than depleting the environmental and social resources connected to cultivation. This discipline is based on four cardinal principles, summarized a few years ago by the NGO Deafal (European Delegation for Family Farming in Asia, Africa, and Latin America) within the “Charter of Principles and Values ​​of Organic and Regenerative Agriculture”.

Regenerative agriculture aims to implement practices capable of increasing soil fertility. This aim is pursued through the increase of organic carbon, mineral elements, and microbiological diversity. It helps in the limitation of soil erosion and the enhancement of local specificities and cultures.

For regenerative agriculture, it is important to protect biodiversity, both in the choice of crops and in avoiding environmental contamination due to the indiscriminate use of chemical fertilizers and pesticides. Local plant and animal varieties are also respected, recovering waste and aiming for zero emissions. Efficient management of water and agro-forestry-pastoral resources is also required.

Regenerate the relationship between living beings

This discipline enhances not only the relationship between man and nature but also between the people themselves. It is based on respect for the dignity of individuals, on working relationships where the protection of rights is at the center, and on transparency and inclusion. It guarantees plants treatments capable of sustaining their health over time and physiological balance. It is also necessary to respect the dignity of people and animals and to foster work and exchange relationships based on the protection of rights and transparency.

The fourth and last principle provides for the promotion of knowledge as a collective good to be acquired and transmitted in a dimension of openness and interaction with others. The universe of regenerative agriculture is not closed, but open to anyone who wants to learn its principles and practices. One of the objectives is precisely that of transmitting the knowledge acquired so that more and more people can take advantage of it.

How to do Regenerative Agriculture

Continuous cultivation of the same plant species causes the soil to lose its properties. Regenerative agriculture restores the technique of crop rotation, choosing plant varieties that can enrich the soil with the minerals consumed by previous crops. By doing this, the organic composition of the soil is strengthened, soil erosion is limited and microbiological biodiversity is encouraged.

The continuous mechanical and chemical stress of the soil does nothing, over time, then limits its fertility. For this, too deep plowing, the continuous passage of cultivated fields with machinery, and the excessive eradication of spontaneously growing plants are avoided. Thus, a better distribution of the organic substance in the soil is obtained, the remineralization of the soil and a large population of earthworms and useful insects, also for the biological control of parasites.

According to regenerative agriculture, the soil should never remain free of vegetables. Except for the desert areas of the world, in nature, the land is always covered with herbs, plants, bushes, and trees. For this reason, the use of practices such as green manuring is encouraged, or the burying of some crops to promote soil fertility.

Regenerative agriculture aims to reduce waste and, above all, reduce emissions. For example, for irrigation, attempts are made to recover as much rainwater as possible. Thus, avoiding wasting water resources that are already scarce. Any excess crops are used to feed livestock or enrich the soil, while fertilization takes place with self-produced compost or organic fertilizers recovered from farms, thus taking advantage of the circular economy.

How does the application of these sustainable practices, many of which recovered from the most ancient farming traditions benefit agronomics? Here are the benefits:

Restoration of soil fertility with a significant increase in the organic carbon available in the soil and its nitrogenous components.

Strengthening soil structures and plant roots is useful for limiting soil erosion and the likelihood of environmental disasters such as landslides.

Increase of local biodiversity, not only with the recovery of forgotten crops but also by promoting the spontaneous growth of local species, favoring wild animal life, and excluding imported species that could damage ecosystems.

Enhancement of the local workforce, with a virtuous economy that benefits from regenerative agriculture not only farmers but the community as a whole.

It’s an integrated approach to evaluating soil quality that examines beyond the purely chemical composition and also looks at rooting, soil life, and soil structure as a whole. Below are proven soil analytics techniques that can be provided by GeoPard.

The chemical analysis of soil reveals the number of basic nutrients available for plant intakes such as nitrogen, sulfur, and potassium phosphorus. By doing the chemical analysis of your soil, It is easier to know the volume of fertilizers needed to obtain high yield and profitability. Likewise, it forecasts the amount of expected increase in yields.

Since soil varies in time and space, the allocation of nutrients to crops also varies in amount and timing. Therefore, by mapping out each farm zone, you can spatially distribute nutrients and fertilizers to the areas needed using statistically generated data.

To avoid fertilizer wastages and proper management of regenerative farm resources, it is essential to do soil sampling. Soil sampling is a technique of selecting or taking soil samples to experiment using appropriate statistical strategies and making decisions regarding the whole population. The authenticity of the decision made from the generated results depends on the sample test results which also rely on the quality of the sample. In short, a good sample representative provides reliable results though it consumes time and effort to obtain a good sample.

After analyzing the last few years of satellite imagery of your fields to delineate maps of potential yield, this map reveals the areas of high and low potential in your field soil map. Then we collect soil samples from your fields using our state-of-the-art digital soil testing device to produce soil maps.

Variable Rate Application Map
Combining these maps and our agricultural expertise, we decide on rates and deliver suitable VRA maps for your machinery. We recommend higher nitrogen rates to high potential sites derived from satellite imagery and soil analysis.

Regenerative agriculture, as seen, aims to act actively on the soil, on people’s health, and on the environmental, economic, and social sustainability of production. Choosing products from regenerative agriculture means bringing to the table not only dishes of the highest quality, but also eating with little burden on the planet.