Blog / Whats / What is carbon sequestration in soil?

What is carbon sequestration in soil? 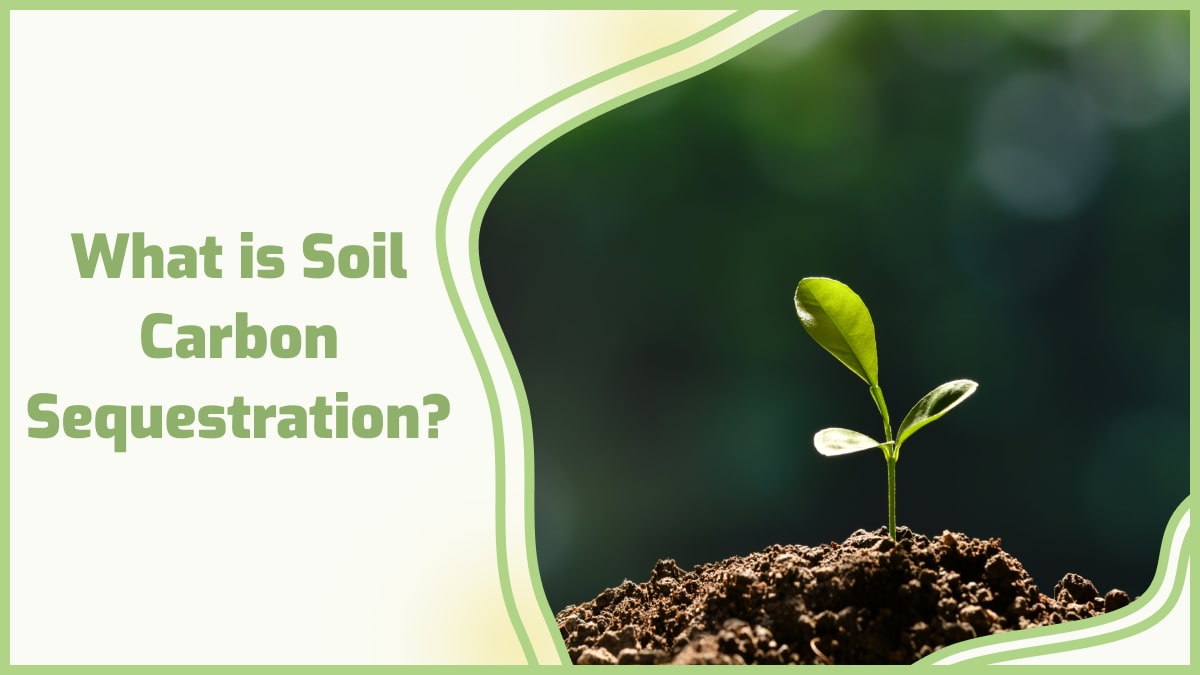 Carbon (C) is an energy currency that sustains life on earth. It can be found as building blocks of living things- both flora and fauna, as a gas in the air, dissolved in water in the oceans and water bodies, and lastly, stored with complex compounds of decomposed materials in the soil.

Earth has a finite amount of carbon, which moves from one place and form to the other regularly and it is what we call a carbon cycle. The carbon cycle is a natural phenomenon that makes life possible on this planet. For instance, plants intake atmospheric carbon-di-oxide as a raw material for photosynthesis to grow their biomass. The C thus stored is released into the atmosphere by the respiration process in plants as well as in animals that feed on those plants. The C is also directly released into the soil when plants die off and their biomass decomposed. This latter form of carbon release from dead biomass and its deposition into the soil is the main principle behind carbon sequestration in soil.

As a result, soils help trap carbon on the surface of the earth which not only increases the fertility of the soil but also prevents the carbon from escaping into the aerosphere. Now, we know that the increment in the level of CO2, a greenhouse gas, in the aerosphere is one of the major contributors to the biggest threat that the earth and humanity have ever faced in the form of climate change. However, the widespread practice of intensive agriculture in recent centuries has resulted in a rapid transfer of carbon from the soil into the air. Soil carbon sequestration is a process that aims at reversing this trend by increasing the carbon storage of soil and thus offsetting the huge amounts of carbon that are being pushed into the earth’s aerosphere, to help alleviate the rate and effect of climate change.

How does carbon sequestration in soil work?

In agricultural ecosystems, soil carbon sequestration is also known as carbon farming which includes the adoption of farmland management practices and activities that facilitate either the absorbing of more carbon by the soil or the increased retention of carbon already existing in the farmlands.

The addition of carbon into the soil occurs in two different ways and in two different forms. The first one is the more common process which involves the conversion of CO2 from the air into Soil Organic Carbon (SOC) in the soil. Plants make food in the presence of sunlight and atmospheric CO2. The food thus produced is converted into sugars (made up of carbon) which are stored in the tissues of the plant. Forests trap carbon in this form for decades or even centuries. However, short-lived farmland crops free carbon into the soil after they die and decay.

Carbon is also stored in the soil in another form called carbonates, which are created when aerospheric CO2 directly dissolves in water and is stored in inorganic forms by combining with several minerals like calcium and magnesium. This form of carbon storage can hold the carbon for thousands of years, as opposed to a few decades by SOCs. However, since the level of SOCs in agro-ecosystems can be controlled and enhanced by targeted land-management practices, they carry huge potential in increasing farmland productivity as well as acting as a negative-emission technology that reduces emissions from our atmosphere.

Several farmland management interventions have been identified and discovered that result in the increment in the stock of soil carbon through the removal of aerospheric carbon dioxide. Some of these interventions are used to reduce the amount of C loss from the soil, some are used to increase the amount of C in the soil while some have the combined benefits of both effects.
Some of these practices are existing practices that are very easy to adopt while others are innovative or experimental approaches that may not be applicable to common farmers today but show promising results for the future. Let’s look at some of the conventional-management practices which are also known as Best-management practices for soil carbon sequestration in agricultural soils.

Tillage is the process of disturbing the soil periodically, usually before seeding, to prepare the land suitable for seed germination and to manage the residual crops present in the land. Tillage is a major cause of the removal of carbon from the soils and directly into the aerosphere because it exposes the soil organic carbon to air and through the process of aeration, it is emitted as CO2 into the aerosphere. Conversely, reduction in tillage is a management practice aimed at reducing the amount of CO2 loss from the soil.

In conventional agriculture, lands are heavily tilled. However, precision farming and advanced agriculture have drastically reduced the need for tillage. Farming practice with the complete absence of any tilling operation during the crop cycle is known as No-till farming. Both reduced tillage and no-tillage farming are primarily done by farmers to reduce soil erosion. However, studies have proved that the benefits from these practices are realized in terms of the high retention of organic carbon in the soil. However, the effect of tillage reduction in preserving the soil carbon from lands can be affected by other factors like moisture condition, land topography, and so on.

The introduction of cover crops in the crop-rotation cycle of farmlands can result in dual benefits for soil carbon sequestration. On one hand, cover crops, which are by nature highly residual and nutrient-rich, will serve as an optimal source of carbon in the soil through mulching. On the other hand, covering the land throughout the year, especially in between harvest and re-planting when the soil would have been exposed to the elements, highly reduces the amount of carbon that is lost into the aerosphere. Similar to earlier, cover crops have multiple other benefits apart from carbon storage like moisture retention, increasing fertility, a secondary source of income, and so on.
Alternatively, to obtain similar benefits, the use of cover crops can be replaced by adopting continuous cropping practices where crop rotation covers the entire duration of the year with a minimal fallow period. However, this intensive system should only be used if the soil can withstand the pressure from increased consumption of nutrients and moisture sustainably.

The conversion of annual farmlands into perennial crops like trees and grasses is one of the most effective ways of increasing the SOC stock. Although converting arable lands into grasslands and woodlands will be seen with skeptical eyes by farmers, doing so can also be the most ideal way of achieving our goal in many cases. For instance, in areas that are highly susceptible to land degradation or on farmlands that are exhausted of their fertility, planting perennial grasses and trees not only protects and recovers those lands, it will also lead to a significant increase in SOC storage as well as carbon storage as biomass.

Moreover, the shift from annual crops to perennial crops doesn’t necessarily mean a complete transformation. Agroforestry is a unique farming system that incorporates annual crops with perennial crops and trees. It is one of the best methods of farming that ensures food security, biodiversity conservation, land preservation, and in our case, soil carbon sequestration.

This management practice directly adds carbon in organic form into the soil which results in an increased SOC stock of our farmlands. Moreover, the added manure or compost will increase the fertility of the soil, thus improving the crop yield and productivity. This will lead to increased sequestration of carbon by the plants and further, more carbon is added to the soil.
One important thing to consider while using this management practice as a means of removing carbon from the aerosphere is that the carbon that we add directly into the soil in the form of manure was already removed from the aerosphere. So, as much as possible, to increase the scope of carbon farming on farmland, manures that have been prepared within the farm will be the best option for greater accountability and overall effectiveness.

Soil Carbon Sequestration in farmlands can be increased by using different management interventions and practices like the ones mentioned before. This will result in a range of benefits for the farmers, primarily in the form of increased yield through improved soil fertility. Also, wide adoption of these management practices will result in the removal of major greenhouse gas from the aerosphere and it can offset the serious concerns that global warming and climate change pose on the future of agriculture on our planet. Moreover, through carbon farming and carbon credit mechanisms, farmers can earn significant amounts of money just by adopting these practices, which even enhances the main goal of increasing crop yield.

Finally, the first step for farmers towards using soil carbon sequestration as a means of increasing yield and income as well as ensuring environmental sustainability is to understand your soil better. To sample the soil and carbon stock systematically and scientifically, it is beneficial to use technological solutions like Soil Data Analytics by GeoPard. As mentioned earlier, the level of carbon that lands can store depends upon many internal and external factors. So, Field Benchmarking and Topography analytics are effective tools to prioritize your land for carbon farming.