Blog / Whats / What Is The Essence Of Carbon Offset Credits, And How To Earn Them?

What Is The Essence Of Carbon Offset Credits, And How To Earn Them? 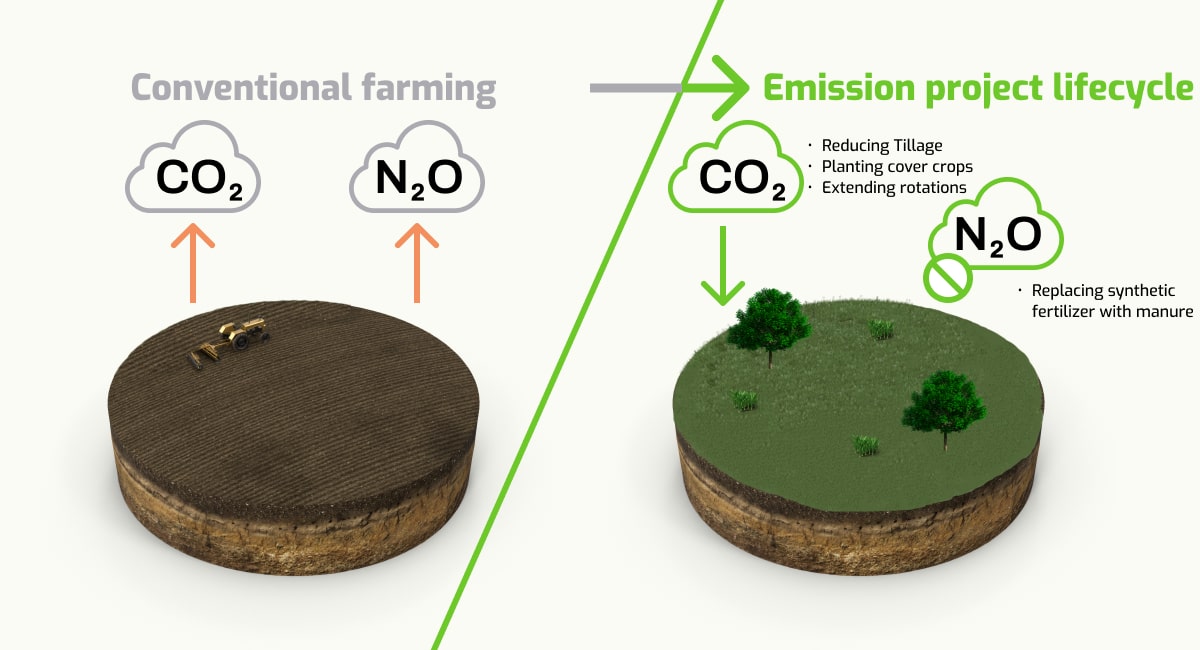 Human activities like deforestation, farming livestock/animals, and burning fuels negatively influence the temperature of Earth. These practices translate to the accumulation and aggregation of more than naturally occurring greenhouse gases (GHGs) in our atmosphere. The main problem is CO2 emissions. The consequence is that we as human beings are increasingly witnessing the greenhouse effect and global warming.

CO2 emissions not going down

Global emissions of carbon dioxide have increased constantly since around 1800. Then between 2014 and 2016, global CO2 emissions were mainly unchanged giving hope that emissions were on the way to being reduced. But then emissions began to rise again in 2017 as well as in 2018 and 2019. In 2018, CO2 emissions grew faster than at any time since 2010-11. (The source)

CO2 emissions from human activities have caused the concentration of carbon dioxide in the Earth’s atmosphere to go up from around 275 parts per million (ppm) before the industrial revolution to over 410 in 2020. The January 2022 global surface temperature was 1.60°F (0.89°C). It is the sixth-warmest January in the 143-year record (The source). According to the UN, greenhouse gas concentrations are rising far too quickly to limit global warming to 1.5 C.

CO2 emissions are mostly a result of fossil fuels that burn, such as coal, oil, and gas. In 2018, the numbers were:

Against this backdrop, carbon offset credits or programs indicate an accounting mechanism for high-carbon companies that want to fulfill corporate environmental responsibility and can likewise engage in such programs to offset their carbon footprint.

In essence, companies and individuals that want to cut down their carbon footprint buy carbon offset credits through a sum of money. A carbon offset credit is a credit for the cutback of greenhouse emissions by a verifiable and measurable metric. In other words, the removal of one metric ton of carbon from the aggregate sum a company produces is represented by each carbon offset credit.

Unquestionably, climate change is triggered by the greenhouse effect. In our atmosphere, several chemical compounds act as greenhouse gases, which trap the heat in the atmosphere and do not release them back into space, and as a result, global warming takes place.

The largest contributing greenhouse gas to global warming is the carbon dioxide generated by human activities. Worryingly, its concentration in our atmosphere had skyrocketed to 48 percent over its pre-industrial level by the year 2020.

By the way, CO2 remains not the only greenhouse gas produced by human activities. Our activities also prompted the emission of other gases but in relatively slighter quantities. Like CO2, Nitrous oxide is a lasting gas that stores up in the atmosphere over a very long time to hundreds of years. On the other hand, methane, far more dangerous than CO2, lasts for a brief period comparatively.

Apart from that, natural causes have played a minuscule role in total global warming. Somewhere in the range between 1890 and 2010, these causes, such as volcanic rupture and solar radiation, have been responsible for less than +/-0.1°C, according to estimates.

Greenhouse gases as a cause of global warming

Presently, global warming propped up by human activities is ratcheting up at an unprecedented rate of 0.2°C every ten years. In 2019, the global average temperature hit 1.1°C above pre-industrial levels, and the warmest decade ever recorded was 2011-2020.

Note that if we hit 2.0°C above pre-industrial levels, there will have grave impacts on the environment, meaning it will have a direct toll on our safety and health. What’s more, we will also be prone to catastrophic changes in our environment across the globe. Thus, the international community has stepped up its endeavors to limit the perniciously increasing temperature to 1.5°C.

Greenhouse gases move and transform when they run through our agricultural systems. The process leads to the absorption and release of these gases over diverse time scales and in different degrees of quantities. Let’s understand the impact of particular greenhouse gases in agriculture.

The main elements that release nitrous oxide are nitrogen fertilizers, soil disturbance, dung, and urine. Its ability to cause global warming is far more than CO2, standing at 310 times more than CO2 over a hundred years. Let us see how N2O moves through the atmosphere and landscape.

Denitrification and urea fertilizer volatilization leads to the release of nitrous oxide.
Lightening also sucks up N2O. Subsequently, it drops down in the form of rain. Nitrogen-fixing bacteria in legumes also convert atmospheric nitrogen into inorganic nitrogen compounds, which are typically utilizable by plants. Crops, trees, and pastures get the utilization of nitrogen-based fertilizers. Nitrification processes in soil and leaching from fertilizers lead to losing nitrogen.

The main elements releasing CO2 are the burning of petroleum derivatives (fossil fuels) for energy, plant decay, and microbial activity in soils. Moreover, plants also take in carbon dioxide through the process of photosynthesis. Let us see how CO2 moves through the atmosphere and landscape.

Respiration by plants and animals alike release carbon dioxide. Pasture, crops, and trees take in carbon dioxide with the help of photosynthesis and then convert it into multiple intricate carbon compounds plus oxygen. Animals eat plants and consume carbon. Soil absorbs carbon from dead leaves, urine, roots, manure, and other organic residues.

The main elements that release methane (CH4) are rice, coal mining, paddies, landfill sites, and ruminant livestock such as sheep and cows. Its ability to cause global warming is greater than carbon dioxide, standing at 25 times more than CO2 over a hundred years. Concerning that, let us see how CH4 moves through the atmosphere and landscape.

While digesting, CH4 is produced as a result of chemically reacting carbon and hydrogen.
Burping by cows and sheep causes the release of methane. There is also a release of methane in small amounts when animal urine and dung ferment while producing energy without oxygen (anaerobic conditions). Wastewater settling ponds also emit methane.

Here we have a look at some advanced ways to reduce greenhouse gas emissions in agriculture.

When it comes to reducing nitrous oxide emission, pesticides and chemical fertilizers prove beneficial. Conscious use of manure is also instrumental in overcoming its emission. Moreover, the implementation of inexpensive inhibitors, which can regulate processes of nitrogen in the soil, is also a go-to option. But the point to consider is that it requires a detailed and definite understanding of GHG production sources, owing to different microbial processes in the soil.

At the same time, identifying the source from which nitrous oxide is produced is also pivotal in the reduction of its emission. As far as measuring the climate change impact is concerned, nuclear techniques provide far more benefits in comparison to traditional techniques. The technique called nitrogen-15 isotopic, in particular, helps scientists find the source of its production.

Scientists heavily use another technique called carbon-13 stable isotope, which alludes to utilizing the natural abundance of carbon-13 participating in the environment, for evaluating the carbon sequestered sources and soil quality. The enhancement of productivity and improvement of efficiency with scarce resources comes great with this technique while identifying several combinations of tillage, crop rotation, and ground cover in this regard.

Among other solutions, one of the best options to reduce the increase of carbon dioxide from our atmosphere is carbon sequestration, capturing and storing atmospheric CO2. Additionally, when it comes to diminishing emissions and energy leakage, optimized and advanced manure management and animal feeding practices can help go a long way.

Are you wondering how to stimulate farmers to reduce emissions from greenhouse gases? There is perhaps no better way than carbon offset credits, which can ensure for our future generations livable and sustainable earth. Furthermore, when it comes to buying carbon offset credits that can counterbalance the occurrence of emissions, the voluntary carbon market is the place to go.

What is a carbon offset?

In simpler terms, a carbon offset credit is a credit for the reduction of greenhouse emissions that is measured in tonnes of carbon dioxide equivalents provided to one party that can later be given to another party to compensate for its emissions. Usually, people buy and sell these carbon offset credits through international brokers, trading platforms, and online brokers.

With regards to diminishing the effect of climate change, agriculture is a significant opportunity. Also, farmers are the vital key to creating carbon sinks and reducing air pollution. For the record, agriculture contributes 15 percent to total carbon pollution. Thankfully, though, modern farming practices and heavy investment in technology can diminish the emissions, knowing that climate change can wreak catastrophic havoc without the concerted efforts of carbon removal.

When it comes to the carbon offset credit price, it is contingent upon supply and demand. The credit price is conditional on the willingness of the buyers to pay, alongside administration costs.