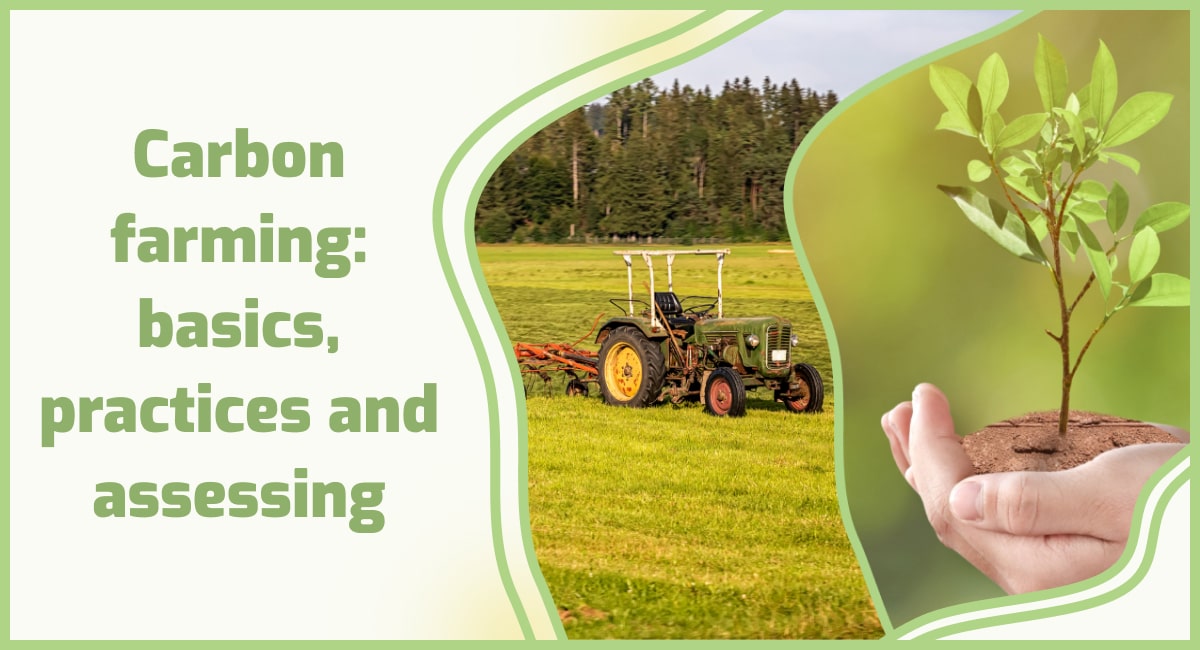 One of the main factors influencing climate change is land management. Several agricultural practices such as tiling a piece of land, using pesticides and herbicides, overgrazing among many others trigger high levels of carbon release that are capable of climate change.

Carbon farming is simply the use of trends or practices that skyrocket the levels of CO2 that are pushed out of the atmosphere and change them to either plant material or soil organic matter.

Due to the above reasons, in this article, we are going to discuss everything touching on carbon farming, ranging from basics, practices – all the way to assessments.

Do you know that as the plants germinate, they always extract carbon from the atmosphere, and finally the soil soaks it and then keeps it? The level of carbon stored depends on the type of climate and also the type of soil.

Ancient farming methods that isolate carbon existed thousands of years back. For instance, reducing the soil disturbance by no-till farming minimizes carbon loss to the atmosphere. Another method that is used is through diversifying crops and growing legumes, perennials, and also cover crops that push back the carbon to the soil. It also houses microbes that play significant roles in carbon storage. Besides that, climate-friendly methods are by keeping livestock together with crops. Whenever cows are rotated across pastures, grasses do recover from grazing, and also the animals’ manure and effects of their grazing revives carbon in the soils. Many farmers use these practices – they are known as “regenerative agriculture”.

The use of residual biomass after harvesting as organic covers the soil instead of burning it. Organic mulching provides tons of benefits such as controlling the soil temperature, increasing soil nutrients, preventing the rate of evaporation to keep the soil moisture, preventing weed growth, controlling erosion, and also improving general soil health.

Shifting from conventional tillage practices to conservation tillage practices such as reduced or no-till. Land tilling loosens and aerates the soil and increases the organic content or carbon to the surface, improving crop growth. When the trapped carbon is released in large amounts, it reacts with the oxygen found in the atmosphere to produce carbon dioxide.

Growing cover crops during the off-season and not leaving the land bare. Cover crops avoid soil erosion, control moisture, lower soil diseases, pests, weed growth, and also attract pollinators. Besides that, they act as mulch and also as a source of organic matter and can be used either for grazing or as animal fodder. Based on the crop type, there are some that are capable of contributing to nitrogen uptake.
Replacing monism with elevated-diversity crop rotations and integrated farming trends.

Taking in those crops into cycles that result in high quantities of residue to the soil adds to the higher soil organic carbon stock. High levels of organic matter ensure a healthy, biologically active soil with zero to few problems such as crop fertility, pests, and even diseases. Crop rotation also provides farmers with extra income.

Replacing intensive application of chemical fertilizers with integrated nutrient management and precision farming. Random use of fertilizers leads to excess nitrogen in the soil that results in soil acidification and salinization, and water pollution because of fertilizer runoffs. As opposed to that, precision farming enables farmers to aim at certain areas and not blanket spraying; carbon farming practices revitalize soil in a natural way thus reducing the need for synthetic products. Choosing compost to restore soil fertility and adjust grassland carbon storage.

When spread all over the soil surface, compost sequesters carbon in a stable form that isn’t easily oxidized. It heightens the land’s resilience to extreme weather events such as floods and drought. It lowers other forms of emissions such as releasing methane and nitrous oxide due to the decomposition of organic materials.

Adding soil carbon by using methods such as no-till is considered cheap. Studies estimate that carbon farming costs only $10-$100 per ton of the CO2 removed compared to $100-$1,000 per ton for technologies that mechanically pull out carbon from the air.

Besides that, carbon farming is also a possible revenue stream for farmers and ranchers who choose to sell the credits they get from the carbon markets. Large-scale greenhouse gas emitters including manufacturers buy these credits to get rid of their own emissions.

Firms such as IndigoAg and Nori have begun payments to farmers for carbon credits. Back on June 24, 202, the U.S Senate decided to pass the Growing Climate Solutions Act of 2021 through a vote of 92-8. The bill allows the U.S Department of Agriculture to aid farmers, ranchers and even private forest landowners participate in carbon markets.

One of the major problems is that the soil absorbs different amounts of carbon based on their depth, texture, and even mineral content. Even though there are given practices that improve carbon storage, estimating how much is stored and for how long is delicate for giving dollar values to them. The markets and practices that work in different locations are also conflicting.

Certain scientific prototypes provide a quantity of carbon sequestration for different climates and soil according to averages across wide areas. The administration requires complex prototypes that are approved by measurements to prevent crediting carbon that doesn’t land in the soil or doesn’t stay there for a long period.

Creating the least standards that predict and accurately estimate soil capture is also considered a priority. Carbon can stay in the soil wherever from day one to a thousand years; hence time scale is a crucial factor for markets. From our perspective, credits need to show the period carbon stays in the soil, complete offsets created only for long-lasting storage.

Revamping carbon-rich soil is a plus to farmers’ through adjusting the soil health and also lifting crop harvests. However, the administration could offer resources to the large performance that possess more capability to sequester carbon on their large acreage.