Blog / Whats / How to use drones in precision agriculture

How to use drones in precision agriculture 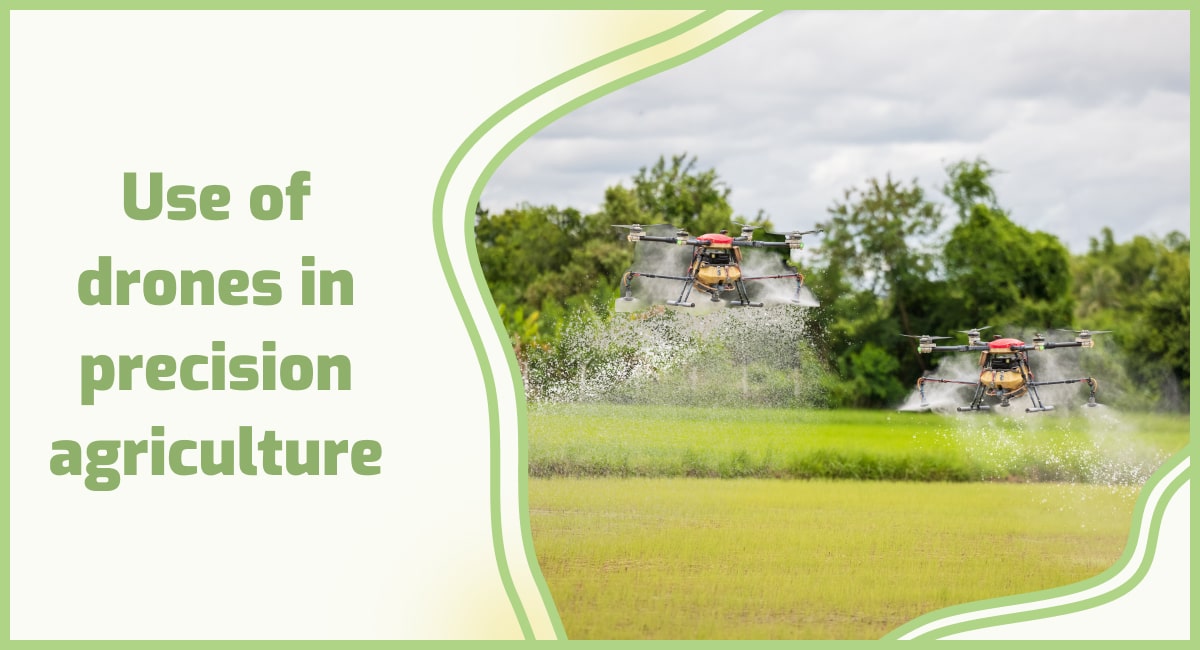 The Growth of food production and consumption demands in the contemporary farming industry has led it to a critical turning point, with global food supplies shrinking faster than ever and commodity prices soaring like never before. Agronomists and farmers throughout the world are under higher pressure to enhance efficient management of resources in the face of dwindling finances, whereas the “farm to plate” phenomenon has led to the increasing push for better traceability of food products as customers are getting quite concerned in the sources of the foods being bought and how they were produced. Additionally, the agricultural industry’s attempts to preserve the supply chain’s security are getting more complicated due to climate change.

How are drones used in precision agriculture?

Drones are becoming more popular in agriculture as part of a holistic sustainable farming plan, allowing agronomists and farmers to aid in streamlining processes while obtaining important information on their crops through thorough data and topography analytics. For instance, surveilling of crops is simplified by the information received from drones that are then applied in developing and implementing continuing enhancements such as alterations in fertilizer application or ditch placement. Using GPS locations at various points along the route, instead of labor-intensive and time-consuming methods of data collection, food may be reliably tracked from the farm to the plate.

The role of drones in precision agriculture

In precision agriculture, UAVs are employed in a variety of tasks ranging from soil sampling and crop field analysis to planting and pesticide application. Drones can be combined with various imaging technologies like hyperspectral, multispectral, thermal, and so on to offer farmers temporal and site-specific information about crop health, fungal infections, growth bottlenecks, and so on. UAVs are very effective for carefully keeping track of huge expanses of agricultural land, taking into account parameters such as slant and height, for instance, to discover the most effective planting regimen.

Importantly, the high-quality resolution of drone data may be used to measure the fertility of crops, enabling agronomists to apply fertilizers with great precision, reduce waste, and design or fix systems of irrigation. After natural calamities, such as flooding, the technology can be especially useful in assisting farmers to survey damage over land terrains that may be inaccessible if you’re on foot. The following are some of the roles of drones in precision agriculture:

Whereas crop evaluation used to have to be done manually, on foot, or from a tractor or using pricey satellite technology, drones now allow us to analyze the health of vegetation from the skies in a matter of minutes. Time-lapse drone photography, for example, can be used to precisely monitor yield growth and development over several days or weeks, and drone-driven NDVI mapping, which employs specialized sensors, is extremely useful for analyzing chlorophyll levels, detecting insects, pests, and disease, identifying weeds and measuring plant stress levels. Farmers are then able to deal with issues promptly and make essential adjustments as and when they are needed to ensure higher productivity. It essentially means that farmers may be considerably more attentive to their crops’ ever-changing needs.

The mapping process of surveying crops with a drone is pretty straightforward. Many recent agricultural drone models come with flight planning software that enables the operator to draw a shape around the area to be covered. The software then automatically designs a flying course and, in some cases, even prepares camera image shots.

While flying, the drone captures images automatically using onboard sensors and the built-in camera, and it uses GPS to calculate when to take each shot. However, if your drone lacks these automatic features, one person must operate the drone while the other shoots images.

Crop failure is caused by weeds and pests in practically all major crops, including wheat, palm oil, soybean, rice, potato, cotton, and corn. Precision agriculture has a wide range of applications and uses in agricultural settings, including weds and pest management. Drones with specialized cameras and sensors capable of detecting specific weeds and pests, as well as GPS technology capable of providing location information for field mapping, can assist in properly tracking enormous regions in a matter of seconds. Drones enable more precise weed strategy planning, increasing the efficiency of mechanical methods and decreasing herbicide growth, leading to cheaper costs, a slower establishment of weed resistance, and increased biodiversity. Drones can cover many hectares in a matter of minutes by flying over the field and sending photographic data for weed and pest identification. Furthermore, farmers and companies may deal with weeds and pests as soon as possible before they harm the entire harvest.

Drones are frequently used to inspect the status of the soil. In conventional agricultural methodology, there are several phases involved in inspecting the ground, such as visiting the field manually with equipment and reviewing soil samples for various parameters. Farmers and academics, on the other hand, can watch vital indications of soil quality long after the seeds have been planted, thanks to improved land monitoring technologies.

Drones for soil and field study can assist in monitoring soil and plant density throughout the growing season to avoid “surprises” later on. This proactive soil sampling with drones can assist farmers in staying ahead of any problems and making modifications as needed (e.g., adjusting irrigation, adding nitrogen fertilizer, etc.) in order to maximize crop health.

Soil composition and condition monitoring are critical for modern farming operations. The more exact the data, like with most things, the better. Farmers can make more informed judgments about where to plant which crops and when to make adjustments by using multispectral soil quality maps of their fields. As a result, with more sustainable land management approaches, yields will be larger and healthier.

Water is a valuable commodity that is critical to the success of all farming operations, so it must be properly managed. Drone thermography, which employs thermal sensors to provide an image that indicates the moisture content of the land, comes into play. With this information, informed judgments about irrigation operations may be made to guarantee that areas of the farm that require more water receive it, while areas that are already moist are not overwatered.

At the end of the day, drones help to make farming a far more precise science by providing the benefits listed above. Water and irrigation concerns are not only expensive, but they can also reduce crop production. Drone surveying can be used to identify these issues before they become a problem.

Another advantage of precision agriculture drones is the effective and efficient use of fertilizers. UAVs can use advanced sensor technology to pinpoint exactly where additional nutrients are needed, allowing them to be applied only where they are most needed. Drones are also very effective sprayers, capable of delivering precisely the correct amount of plant food at just the right time, successfully lowering the amount of fertilizer discharged by up to 20%. This not only reduces farming costs but also saves excessive environmental damage.

Types of drones used in Agriculture

Unmanned aerial vehicles come in a variety of shapes and sizes, and they can be classified into the following categories:

Fixed-wing drones use the lift and drag to maintain altitude in the same way as airplanes do. They are fairly simple to operate. It has a non-movable wing and a propeller that allows it to go ahead. Because of its design, it must always be moving relative to the air surrounding it in order to stay aloft. As a result, the wind can have a significant impact on its operation. Another constraint is that larger drones require a runway area for deployment and retrieval, whereas smaller ones can be hand-launched and retrieved by landing on a soft surface.

A new category of hybrids that can take off and land vertically combines the benefits of fixed-wing drones with hovering ability. Fixed-wing hybrid VTOL (Vertical Take-off and Landing) drones combine UAV (Unmanned Aerial Vehicle) qualities with the ability to fly in a single location while keeping hybrid traits. These drones can take off from a single spot and fly vertically for an extended amount of time because of this function.

Multi-rotor drones are the most commonly used for mapping and modeling. These drones are made up of a fuselage and four motors that power the proper propellers. Multi-rotor drones are a fantastic choice for aerial photography due to their compact size and outstanding control. They can simply hover and take off vertically, giving them even more mobility. Because of their design, they can also support the higher weight. The multi-rotor can transport goods such as a DSLR camera or other items that allow it to move. Multi-rotor drones can easily navigate small spaces. Drones’ GPS receivers will allow them to hover and follow a predefined path using waypoints.

Drones are used for more than just military purposes. This flying equipment can now help farmers and agribusinesses maintain their land more effectively and efficiently. According to the Association for Unmanned Vehicle Systems International, in the near future, 80 percent of Unmanned Aerial Vehicles (UAVs) will be employed for agricultural reasons. But how prepared is the agricultural sector for the use of drones? And how prepared are the drones to operate fully on the farm?