Blog / Whats / What is the purpose of Strip-till farming

What is the purpose of Strip-till farming 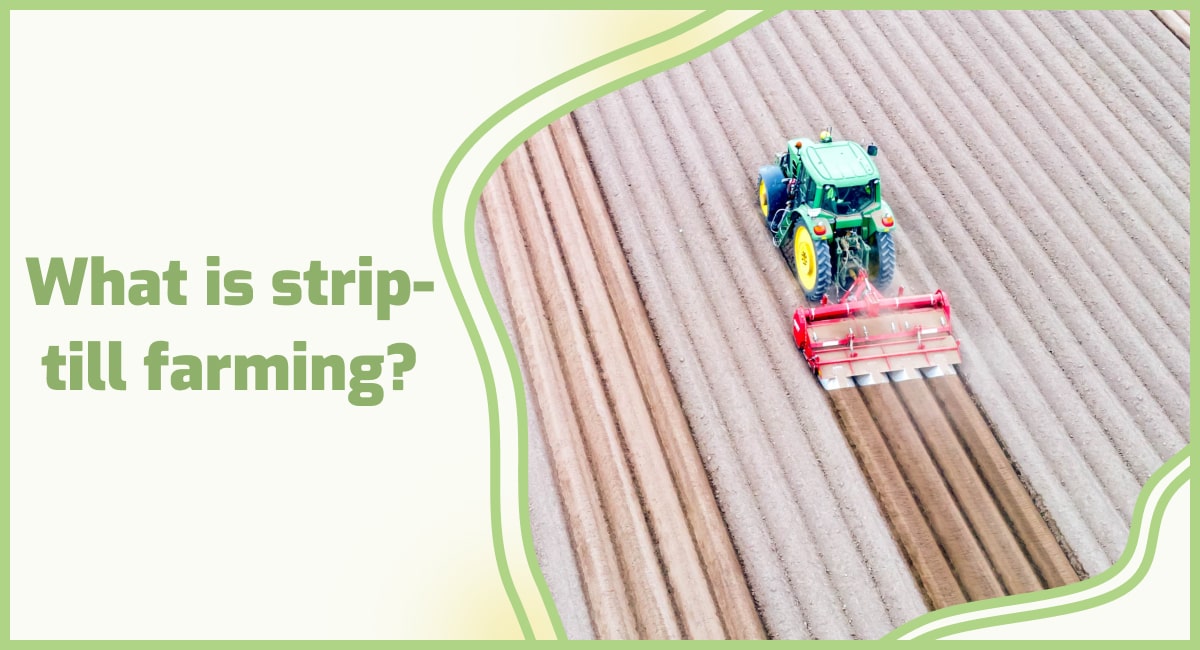 For years, farmers have actively tilled fields, reaping the benefits on their farms and in their crops. However, in recent decades, some producers have embraced no-till farming as a result of climate change, economics, and conservation efforts to increase soil health and sustainability. Growers usually divide themselves into conventional tillage and no-till categories.

Strip-till farming is defined as tillage that is performed parallel to the row direction and is less than full width. By and large, this technique disrupts less than a quarter of the plow layer. Strip-objective tillage’s objective is to generate a seedbed condition in the row comparable to moldboard plowing while leaving a sufficient quantity of crop residue on the inter-row soil surface to prevent erosion.

What is the point of strip-till farming?

Strip-tilling is a technique that utilizes strip-till farming practices, for example, a knife instrument such as a fertilizer injection shank to till residue-free strips of soil preparatory to planting. Typically, the strips are six inches broad, or approximately one-third the width of the row, and four to eight inches deep. Prior to or during planting, these strips are cleaned of debris and tilled to warm and dry the soil. Fertilizer is commonly applied during strip tillage to improve seed sowing. The seeds are directly placed into the loosened soil strip.

Strip-tilling is the process of tilling narrow-width strips in optimal soil moisture conditions, typically in the fall, in order to promote early spring soil moisture evaporation and soil warmth in the top two inches. There are several strip-till benefits. They include:

Contributes to erosion control. Reduced disturbance and adequate residue cover help to keep soil in the field from eroding.

Compaction of the soil is reduced. Leaving the soil alone allows for the development of soil structure, and limiting excursions over the field reduces the soil’s compacting burden. Time has economized. The overwhelming majority of strip-till systems rely on a single fall “tillage” pass and do not require spring tillage. Reduces fuel consumption. When compared to conventional tilling, which typically requires three to four passes, significant fuel savings can be realized. Enhances the health of the soil. The reduced disturbance is a necessary first step toward healthier soil. With reduced tillage, earthworms, fungus, and other soil organisms can thrive, enhancing soil health indicators such as soil aggregation.

Increasingly, cover crops will be used. Allowing a cover crop to grow between the rows while keeping the rest of the soil undisturbed is a more advanced step toward soil health. Strip-till operations can be undertaken following cover crop application to create a clean seedbed for the following crop while leaving the majority of the field covered in cover crop.

1. Aging damp soil in order to aerate it

This is often employed on wet soils and its primary function is to aerate the soil during tillage since it can burn up to 30 horsepower per row at a depth of around 6-8 inches by a width of approximately 6-8 inches. Strip tilling is a technique used by farmers to remove surplus water from the soil while conserving its nutrients. Excess water can have a detrimental effect on agricultural productivity, which is why it should be drained. Tillage can impair soil structure, resulting in a decrease in agricultural yields. Additionally, excess soil moisture can be managed by growing a cover crop to cover the soil and absorb excess moisture. If the producer does not wish to employ still-strip, another technique is available.

2. Elimination of residue through soil warming

This requires around ten horsepower each row and results in shallow tillage by removing soil residue. It is comparable to soil drying, as the heat must be applied to the soil. By extracting the moisture from the soil, heat is used to separate it from the water. Due to the porous nature of the soil’s top, it can self-warm without the usage of strip-tilling. This natural strip-tilling occurs most frequently during the summer when the sun’s heat cools the soil and accelerates water evaporation. By allowing water to stream through the tilled ground and wash away the nutrients on the soil’s surface, sloppy soil frequently contributes to soil erosion.

Strip-till does not apply fertilizer on a consistent basis and should only be used as a substitute when crops exhibit indicators of fertilizer need. Crops may exhibit a characteristic that indicates a nutrient deficiency, such as nitrogen. To maintain the crop’s longevity, it is critical that soil nutrients are available at all times. When cultivated properly, certain crops such as soybeans, wheat, and corn can draw minerals and water from the soil. It is strongly suggested to plant seeds that promote soil fertility and offer essential soil nutrients since seeds can provide adequate nutrients during the plowing process. Fertilizer can also be utilized to aid in the soil’s nitrogen fixation process. For the optimum results on the grower’s crops, the fertilizer can be put beneath the surface soil.

Strip-tilling or crop planting during the tillage season may aid in soil compaction reduction. The operation requires between 40 and 50 horsepower and can be up to 90 horsepower if the tillage pan is deeper. Once this process is complete, the machine can be freed and allowed to rest for a period of time, as its services will not be required for some time. Strip tillage has a high potential for altering the original structure of the soil and reforming the compaction layer. Tilling is rarely necessary when plants have deep roots in the soil, particularly if they have no effect on the soil’s fertility. This is because the soil nutrients remain intact and the roots do not obstruct the uptake of nutrients from the topsoil.

5. Strip-tilling has been shown to increase crop productivity and soil nutrient availability.

The majority of strip-tilling farmers increased their output by harvesting more crops at the season’s end. They are not required to continue stripping until they have done it appropriately and in compliance with the standards. Additionally, their crops grow rapidly after they are sown along the strip as needed. This will increase their crops and output beyond harvest in the long run. Producers are frequently assured of tremendous returns during harvesting, as the quantity of products produced exceeds the initial strip-tilling cost.

6. Reduce expenses for fertilizer, fuel, labor, and other inputs.

According to some research, the strip-till has a temperature difference of about 6 degrees higher in June. Farmers claim that strip-till allows them to plant their fields earlier than no-till. Strip-tilling allows the soil to warm up and dry out more quickly in the spring.

Difference between no-till and strip-till farming

No-till farming is a method of planting directly into crop leftovers without using tillage machinery or other mechanical processes. Strip-tilling is a technique for planting seeds in small tilled and fertilized strips. No-till farming reduces soil erosion and debris loss to water and wind, hence lowering the sediment load in aquatic bodies. Additionally, it has the potential to improve soil qualities such as water retention capacity, organic matter content, and compaction. Reduces soil temperature, retains moisture in the soil, and shields the soil from the sun and wind.

These farmers vary their plowing tactics on a regular basis, depending on the produce. For crops that are not well adapted to strip-till, conventional tillage or other conservation tillage methods are used. Tillage may be influenced by soil conditions.

Additionally, it can be utilized to control soil erosion on extremely erodible soils. The majority of federal agricultural programs, including economic contexts and premium incentives for crop insurance, require participation in conservation plans based on tillage. During droughts, some individuals use no-till or strip-till agriculture.

Strip-till has been chosen by certain farmers as they transition to no-till systems for conservation compliance and cost savings. Strip-till corn yields were found to be slightly higher and more consistent in some places than no-till corn yields.

Strip-till yield responses are significant in some years; in others, no-till yields are equivalent to or exceed strip-till yields. This yield disparity between the two approaches raises questions about the role of strip-involved tillers in maize growth and if no-tillers may overcome yield disparities through machine enhancements or better management.

Due to the limited amount of tillage, strip-till seedbeds frequently have a more dark and oxygenated area for a longer length of time. While this may be favorable in some years, it may provide a severe erosion danger if fields do not completely conform to the contour.

The results of a study on the pace of soil warming following planting are inconclusive. Within a day of planting, if the no-till planter is equipped with row cleaners and a colter, the temperature of strip-till and no-till seedbeds is normally equal.

As a result, the primary distinction between the two procedures may be the attempt to perform limited in-row tillage without resulting in a smeary “muddied-in” situation. The longer a field remains untilled, the easier it is to remove the “muddied-in” condition.

Many precision farmers have recently abandoned full tillage. Many originally chose the severe no-till strategy, which they saw to offer numerous benefits. However, no-till farming introduces problems, and precision farmers are frequently forced to rethink their strategies. Some choose to return to full tillage, while others opt for an adaptive method known as strip-tilling. Precision is not a factor in the adoption of strip-till farming. However, there is one definite prerequisite for strip-tilling to perform properly. That is why strip-till is finally gaining steam — the agricultural technology expertise, infrastructure, and established base are all in place. The tables will flip, and strip-till farming will reward precision farming’s favor.

The majority of soil parameters exhibit a high degree of variability at small scales. At this scale, agronomic procedures and treatments are typically meant to be exceedingly uniform. Precision agriculture’s core difficulty is the contradiction inherent in applying uniform treatments to varied environments. Historically, precision agriculture has meant applying material inputs such as fertilizers, herbicides, and amendments in a variable manner. While the practical results in terms of economic feasibility or crop production benefits are debatable, the fundamental concepts of precision agriculture applied to other inputs such as time and labor have theoretical advantages and may have a greater chance of developing into a profitable technology.

Strip-sill success requires a level of supervision and control that no other agricultural practice or activity, except planting, requires.

And to make the task of yield analysis easier, try the GeoPard app. It is a reliable tool for Ag operations that can help you with improving agronomic decisions.