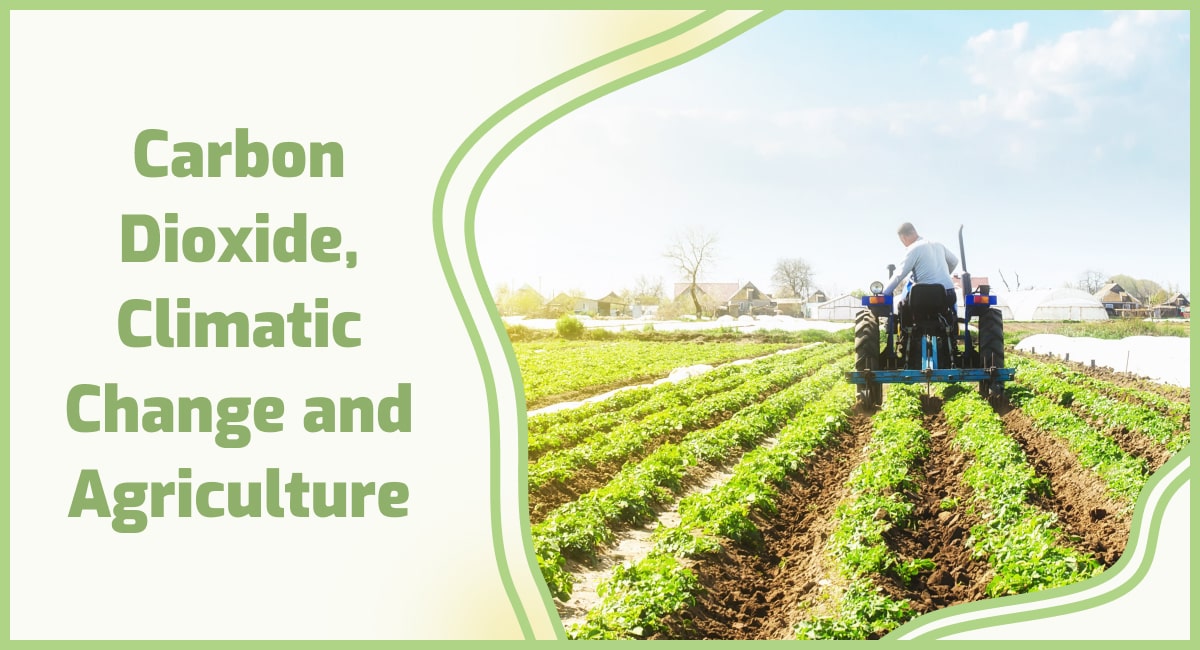 Alongside many sectors that contribute to the world’s economy, agriculture leads nearly all of them. In the U.S. economy alone, it’s estimated that the crops, seafood, and even the livestock generated add up to more than $300 billion annually. When the food services and also other types of agriculture-related products are also added, then, the total impact is estimated to be more than $750 billion to the gross domestic product.

With that said, agriculture together with fisheries mainly relies on the climate. With the changes and mostly the increase of carbon dioxide (CO₂) and temperature are more likely to adjust the harvests in some of the areas across the globe. The general climate changes can make the growth of crops, livestock keeping, and even catching fish extremely hard across the planet.

Agricultural ecosystems are known for keeping high levels of carbon levels. Below are some of the methods that you may use to avoid the increase in carbon:

What are CO₂ and other gases?

Have you ever wondered what carbon dioxide is and also where it comes from? Well, it’s simply defined as a greenhouse gas that doesn’t harm when in smaller quantities or low levels and also is naturally produced.

When produced at higher levels, it can alter productivity rates and even sleep. Apart from that, this gas is always generated indoors through the air that we inhale, and also its levels concentrate indoors with much less ventilation.

Why is CO₂ important?

Carbon dioxide is built by one section of carbon and the other two sections of oxygen. This gas has proved to be on the list of the essential gasses on the planet since it is used by plants to generate carbohydrates through a process that is known as photosynthesis. Humans and animals highly depend on plants for food making photosynthesis crucial for the survival of any form of life on earth.

Where does CO₂ come from?

Indoor carbon dioxide levels mainly result from a combination of outdoor CO₂ – indoor breathing and also the general ventilation rate of the building. Whenever buildings and even homes continue to be of high energy and also airtight, the lesser fresh air is found in the building.

Several or nearly all of the ventilation systems that are built and used these days mainly recycle air to reduce the energy used, by pushing the contaminated air around as opposed to generating new air. Through this, high levels of CO₂ are produced and also low-quality indoor air.

CO₂ as a cause of climate change

You must have heard about CO₂ emissions in relation to global warming. As the CO₂ levels increase in the air through the burning of fossil fuels, it all results in a warming effect that has higher chances of altering the earth’s climate. Climate change also destabilizes the Earth’s temperature equilibrium and has far-reaching effects on humans and also on the environment.

A difference is attained between direct and indirect impacts of climate change. Sharp points in the climate system with unpredictable and also irreversible results can then be felt. It is not scientifically possible to give each weather event to the current change in the climate. However, it is possible to statistically prove that global warming will heighten the chances of extreme weather events. Some of the direct impacts of man-made climate change are not limited to:

Some of the indirect impacts of climate change that directly affect us and even our environment are not limited to:

How is it formed in agriculture?

Moving and changing from one form to another in all kinds of farming systems, greenhouse gasses are absorbed and also released at different intervals and also in a different range of levels.
Apart from earlier discussed ways, carbon dioxide can also be released via ways such as:

Carbon dioxide is also taken in by plants through photosynthesis and also kept in vegetation and in the soils in the form of carbon. Carbon dioxide also travels across the atmosphere and landscape in ways such as:

What to do to reduce carbon dioxide emissions?

Every day, changes in the climate can be felt with much ease by mostly the farmers, and sadly, few of them know of the ways that can be used to prevent or counter this catastrophic problem. Fortunately, there is one hidden solution that is used to lower the levels of greenhouse gasses held in the air- agriculture. Lowering tillage, adjusting crop rotations, growing more cover crops, and also integrating livestock with crop production systems are some of the ways that have proven to lower and even hold more carbon that is generated by other industries. The held carbon is later converted into plant material or even soil organic matter that heightens the average soil health and also adjusts the capability to produce food that is essential in the future.

Apart from the above-described benefits, these inputs are also known to lower the costs too. Embracing the solutions is the best way to go and it is one of the major reasons why you may have been wondering why several farmers across the globe have always insisted on the use of ancient agricultural trends.
There are also other several practical methods to avoid the losses of greenhouse gasses that always relate to improved farm productivity. Many of them involve creating carbon farming and also carbon offset.