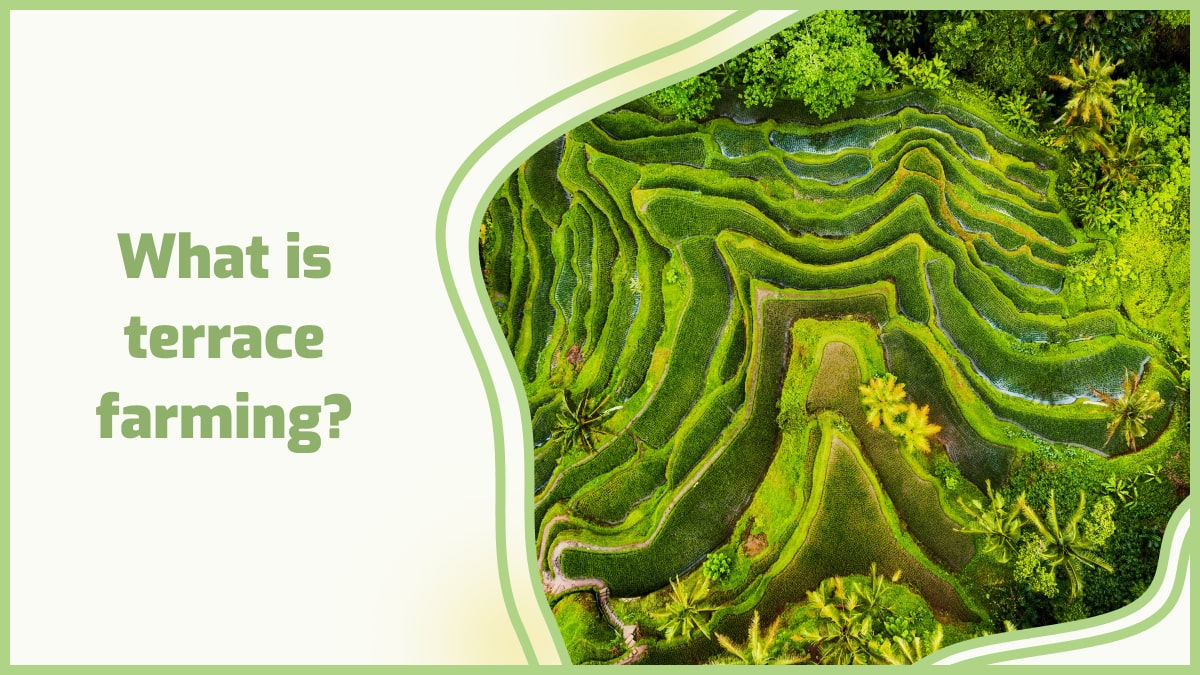 Terrace farming is a traditional and ingenious method of growing crops on steep hilly slopes by constructing successive levels of flat surfaces along the slope that resembles the steps of a ladder. As a result, they are also sometimes called step farming.

The need to change the entire landscape of massive hills to make terraces, which is definitely a very labor-intensive process, primarily comes from the fact that water flows downslope at a very fast speed on hilly slopes compared to flatlands. It causes some serious farming issues such as the water retention capacity of the soil is very limited, soil erosion is exacerbated, soil particles and nutrients flow downslope to rivers and are carried off and in case of heavy rainfall, landslides and mud-slopes may occur in the absence of trees that were cut to make space for farming. Making terraces solve all these problems by making the land more stable, less prone to erosion, holding water with bunds, and controlling the water flow using drainages built on each terrace level that carry water to the one directly below it. The size of terraces varies according to each landscape but commonly ranges from being (two-three) meters wide and (to fifty-eighty) meters in length. The slope or gradient of the terrace is also controlled according to the environment and the intended farming crop.

There are primarily three types of terrace farming systems commonly in practice based on the type and level of disturbance administered to the slopes for making the terraces. They are bench-terracing, contour-terracing, and parallel-terracing.

These are the most commonly found type of terraces in most parts of the world and are the ones which we refer to when we say terrace farming in general. In bench terracing, the hills are cut into regularly spaced wide flatlands that do not allow the water to flow down freely and take away the topsoil.

To construct bench terraces on the side of a hill, you start from the top and start the process known as ‘cutting-and-filling’ to make wide flat areas of the desired width that extend down the slope. Additional materials like stones, border plants, and bio-engineering techniques can be used to help the newly constructed terraces stabilize, which strengthen over time. Consequently, this involves a lot of earthworks which is mostly manual because of the difficult terrain and this is very time and labor-intensive.

Bench terraces are highly effective in capturing the flowing water and even more so when they are provided with bunds on the sides to make the water stagnant which is very important for rice farming. However, they cannot be used for growing species like potatoes that cannot grow well in water-logged conditions.

The contour terracing system combines the benefits of contour farming and terrace farming practices. It is a form of terracing that requires much less earthwork and landscaping than the bench terracing system since the terraces or growing flatlands follow the natural contour of the hill.

Contour terraces are constructed by building each terrace level on the same elevation that follows the relief and thus they are not equally spaced apart. As a result, they have a uniform intra-level gradient which can hold the water longer. Like bench terraces, bunds, as well as drainage, are provided on each of the levels, and in rainy areas, a grassed-waterway channel is commonly constructed along the slope that drains the collected water directly downslope.

When it comes to making anything parallel, it is obvious that it requires much more work than simply adapting to what we have. The same is the case for making terraces on sloping lands. To make terraces that are parallel to each other, we will have to make bigger changes to the landscape by cutting a huge amount of materials from the top and filling it at the base. This is not possible in remote areas but with the advent and accessibility of powerful earth-moving machinery, the establishment of parallel terraces in gently sloping terrains comes with a number of benefits. The most significant advantage of parallel terraces over others is that it is way easier to carry out farming operations like tillage, seeding, weeding, etc with tools in parallel areas mainly due to the elimination of point-rows. Point rows are the pointed and narrow parts of the terraces often found in bench and contour terraces. Furthermore, parallel terraces result in more ease during waterways and drainage establishment.

Hills carved out in the form of terraces that are lush with crops like rice, paddy, wheat, corn, pulses or fruits form a beautiful landscape and can be found all over the world where economic activity occurs in hilly regions. However, some terrace farming areas are more popular than others because of their rich history, cultural value, and their economic significance. Some of the famous examples of terrace farming are as follows:

In a number of remote villages of the Cordilleras mountains in the Philippines, rice has been grown in terraces for more than two thousand years and is now recognized as a UNESCO World Heritage Site. The terraces not only hold an economical purpose for the native Ifugao people but are embedded in the culture and tradition of the region. Spreading across more than ten thousand square kilometers, the entire area was provided with an intricate irrigation system.

One of the Seven Wonders of the World, The Machu Picchu of the Andes Mountains in South America is made entirely of terraces. Besides serving as a place where such advanced civilization could flourish with numerous temples and houses, the terraces also allowed for farming in very rugged topography which made it all possible. Scientists, agriculturists, and geologists are still amazed by the irrigation channels of the terraces that made complete use of the rainwater where other irrigation techniques were not possible. Unlike other common terraces, the terraces of Machu Picchu make extensive use of rocks and walls to support the levels. To this date, the Machu Picchu terraces remain one of the most beautiful terraces ever built.

The Sa Pa terraces of Vietnam are as important for their ability to produce large volumes of crops like rice, maize, and vegetables as they are for the tourism industry of the region. The majestic rice fields of the area are admired by many for the mosaic of colors that it exhibits at different times of the year.

The Salinas de Maras of Peru are very unique from other terraces since they produce salts instead of crops. These artificial terraces built on natural salt fields have been in existence for centuries.

Historical places as well as the adoption of this farming practice in almost all mountainous parts of the world are evidence of the multiple benefits of the terrace farming system. The primary benefit of terraces in agriculture is that it makes growing crops possible in sloping lands by creating stable flatlands where the necessary materials for the crop’s growth can be retained. Since the necessary materials are water and soil, terraces help prevent farming issues like soil and nutrient erosion by water. Furthermore, without terraces, many fragile landscapes in the mountains would not even exist because of calamities like landslides and mudslides. So, terraces are an effective method of soil and land conservation in mountains and hills.

How does terrace farming help in conserving soil?

The conservation of soil mainly means holding the soil in place without damaging its physical and chemical properties. Water is the primary agent that erodes the soil of an area mainly through runoff and the effect of runoff is multiplied when the land is sloping. As a result, soil erosion is a major concern in hilly areas where runoff water attains high speeds.

By constructing terraces in those hills, we intercept the running water and drastically reduce its velocity. In fact, each level of the terrace holds the water it needs and the remaining water flows to the lower level either through a gradient or through drainage outlets.

In areas with intense rainfall and steep hills, the vulnerability to landslides and mudslides is very high which can make the entire landscape permanently unusable for any activity. Even in such areas, terraces help prevent such calamities by integrating tree species with food crops.

As mentioned earlier, soil conservation doesn’t only include its physical integrity but protection of its chemical properties as well. Terrace farming is one of the most sustainable methods of farming which uses minimal artificial fertilizers and relies primarily on organic fertilizers. So the quality and fertility of soil further increases. Terracing helps retain soil cover and fertility since water flows do not wash off the topsoil and nutrients.

The most noticeable disadvantage of terrace farming is that it is a very labor-intensive and time-consuming process since heavy equipment and machinery aren’t available in most cases. Another serious disadvantage of terrains is that if improperly constructed, they can hold excess water leading to rainwater saturation. This might result in crop loss, erosion by overflow, and even terrace failure by mudslides and landslides. So while constructing terraces, it is very important to build them according to the rainfall patterns and geology of the area. Finally, building terraces might even disrupt the natural hydrological and nutrient cycling of the region and even degrade the soil quality.

To sum up, the benefits of a properly planned and designed terrace farming system far outweighs its possible drawbacks. This traditional system of farming has large implications in areas all around the world, especially in the face of changing climate and increasing food security. Terraces have been in existence for centuries and their application should be extended since they carry huge potential in converting virtually un-farmable sloping lands into productive agricultural land along with conserving the soil. Even on gentle slopes, terraces like contour terraces and parallel terraces can be made to gain added benefits from the natural relief of the land. Finally, since it is very important to design your terraces according to the topography and needs of the land, tools such as topography analytics are very useful and important.