Blog / Whats / Topography and nutrition content in soil and yield 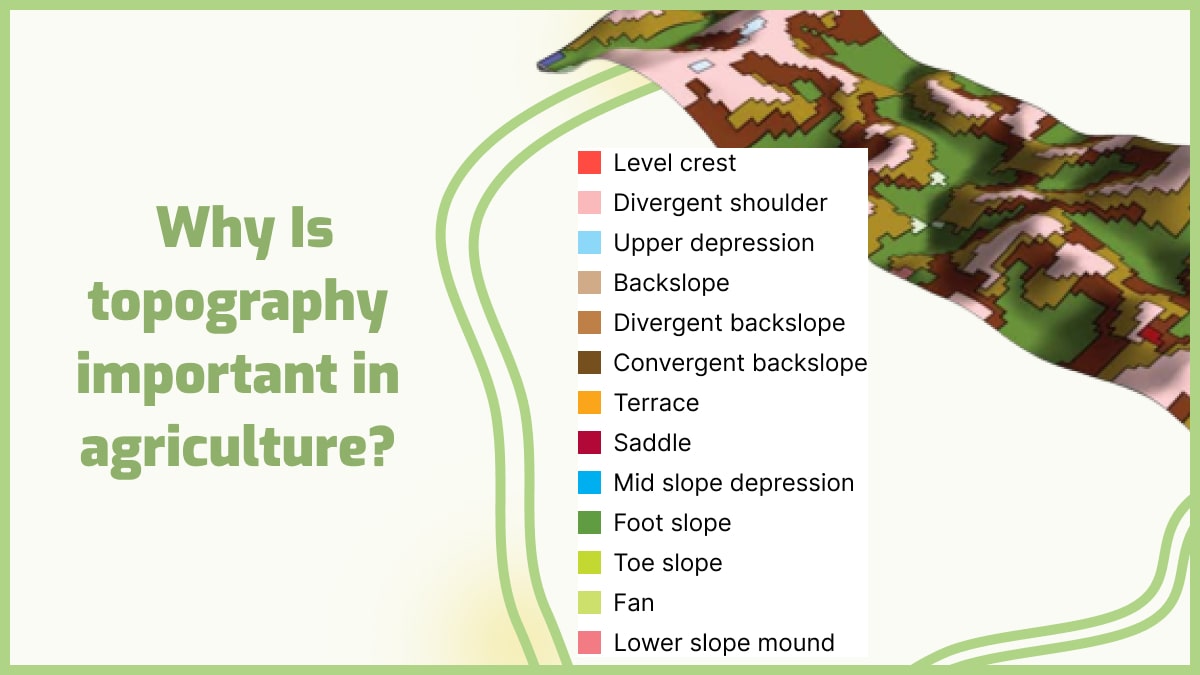 The topography of the land, climate, and soil type can have a significant effect on the nutrient content of crops. It has been demonstrated that soil topography has a substantial effect on its fertility. The steepness of the slope and its inclination concerning the sun have a marked influence on the amount of radiant heat received by any given area, and the greater this is, the more rapidly plants will grow.

The fertility of soils depends largely upon their composition, structure, and texture. Soils with a high proportion of sand in their composition are generally more fertile than those containing large amounts of clay; soils that are loose in texture are easier to cultivate than those which are compact; sandy loams are most suitable for growing cereals as they contain good quantities of humus.

The chemical composition of soil depends largely upon what type of rock material it was derived from. Sandstones and shales usually form poor soils, while limestones give rise to rich loams which are well suited for arable farming.

As an example, consider the following:

The larger amounts of rainfall in wet regions allow greater biological activity in the soil. This biological activity leads to a more rapid breakdown of organic matter into soil nutrients. The higher temperatures also hasten decomposition. As a result, crops grown in wet regions tend to have higher concentrations of nitrogen and other plant nutrients than those grown in dry regions. Crops are grown at high altitudes generally have lower nitrogen concentrations because there is less biological activity at high altitudes and because air temperatures are cooler than those at lower altitudes.

Why is topography so important in agriculture?

The topography of an area is the physical shape and appearance of the land. It includes hills, mountains, valleys, plateaus, and plains.

The importance of topography in agriculture:

Topography affects the climate in that it influences wind patterns and weather patterns. For example, mountains block cold air from flowing over the warm ground below them, which results in warmer temperatures on one side of the mountain range than on the other side.

Topography affects agricultural production because it affects how water flows through an area. For example, if water flows downhill quickly, it can carry away soil nutrients or leave crops too dry for optimal growth (depending on what type of crops are grown). If water flows slowly through an area, then it can provide moisture to plants over a longer period but also increase erosion by carrying away soil particles with it.

Also, topography affects agricultural productivity by determining how much sunlight reaches plants at different points within an area. In general, flat areas receive more sunlight than hilly areas because there are fewer obstructions between plants and the sun’s rays that could block them from reaching their leaves.

The topography of a region has a significant impact on the agricultural activities that can be carried out there. In particular, it determines how much water is available to irrigate crops and how much rainfall will be received by different parts of a country.

Topography affects agriculture because it determines if an area will be wetter or drier than another area and if a farmer wants to grow certain crops.

The topography of a region also affects how easily you can move around, which can have an impact on the types of crops that are grown locally. For example, if there are mountains or hills in your area, they may make it difficult for farmers to get their products to market because they would have to take a long time going up and down the hillsides with their produce. Such terrain would make it difficult for them to transport their produce quickly enough for it to reach consumers in time before it spoils.

Topography can also affect what type of equipment and machinery will work best on a farm. For example, hillsides are often too steep for tractors so farmers must rely on their muscle power to get things done.

Topography affects how much labor it takes to run the farm. If the land is flat and smooth then it won’t take much effort for workers to move around during the planting or harvesting season but if it’s hilly or uneven then they’ll have to use more energy just to get around.

Another reason that topography is important in agriculture is that it affects how much rain each area gets each year. If an area has a lot of mountains around it, then it will receive more rain than an area with flat land because more clouds are forming over those mountains and releasing their water into those areas which makes them wetter than other places around them.

Plant biologists use topography as one factor in determining where plants are native to, or where they may be able to thrive and survive if planted in another location. This includes crops like wheat and corn that are grown widely around the world.

How does topography affect the soil?

Soil profiles are controlled by five distinct, although interconnected, factors: parent material, climate, topography, organisms, and time, according to soil study. These are referred to as soil formation factors by soil scientists. Soil profiles have different characteristics.

The substance from which soil originates is known as soil parent material, and it can be a rock that has disintegrated in place or material deposited by wind, water, or ice. The parent material’s character and chemical composition are essential factors in defining soil qualities, especially during the early phases of formation.

Soils produced on coarse-grained parent material that is composed of weather-resistant minerals are likely to have coarse grain texture. When the parent material is made up of unstable minerals that weather quickly, fine-grained soil forms. Soil chemistry and fertility are directly influenced by parent material composition. Calcium, magnesium, potassium, and sodium-rich parent materials are easily dissolved in water and made available to plants. In humid areas, limestone and basaltic lava both contain a high amount of soluble bases and form productive soil. Water moving through the soil removes the bases and replaces them with hydrogen ions if the parent materials are low in soluble ions, rendering the soil acidic and unsuitable for agriculture. Soils formed on sandstone have low soluble bases and a coarse structure, making leaching easier. As parent material is transformed and the climate becomes more important, its influence on soil qualities tends to diminish over time.

Soils, especially on the global scale, have a high geographical link with climate. Physical and chemical reactions on parent material are highly influenced by energy and precipitation. Climate influences vegetation cover, which affects soil development. Precipitation has an impact on horizon formation elements such as dissolved ion translocation via the soil. Climate has become a more important influence on soil qualities over time, while parent material has become less important.

Plant and animal organisms play an essential part in the formation and composition of the soil. Organisms help decomposition, weathering, and nutrient cycling by adding organic matter. Climate has an impact on the richness and diversity of soil organisms and plant life that grow on the surface.

Weathering mechanisms continue to work on soil parent material over time, breaking it down and decomposing it. The physical and chemical features of layers in the soil profile continue to be differentiated by horizon formation processes. As a result, older, more mature soils have a well-developed horizon sequence, but some may be weathered and leached to the point where visibly distinct layers are difficult to discern.

This is a distinguishing feature of oxisols. Some geological processes prevent soil formation by constantly modifying the surface, preventing parent material from weathering for an extended length of time. For example, erosion of hillsides removes material regularly, preventing soil growth. New sediment is frequently deposited along river channels as the river rushes out onto its floodplain during floods. The process of soil formation is restarted by the constant addition of new material. During the soil growth process, climate and time interact. Warm and rainy temperatures speed up the development of soil, allowing it to reach maturity sooner. Weathering is slowed in cold climates, and soil growth takes significantly longer.

GeoPard is a new and innovative way to explore soil features and topography for better decisions and crop development. They are taking soil mapping to the next level by providing you with accurate information on soil types, soil quality, and crop suitability.GeoPard will help you make informed decisions about your farm. It’s like having your agronomist on hand.

GeoPard uses advanced technology that allows you to collect data on-site which you can then use to create unique maps of your farm. These maps will show you exactly where your crops should be planted to maximize their productivity.