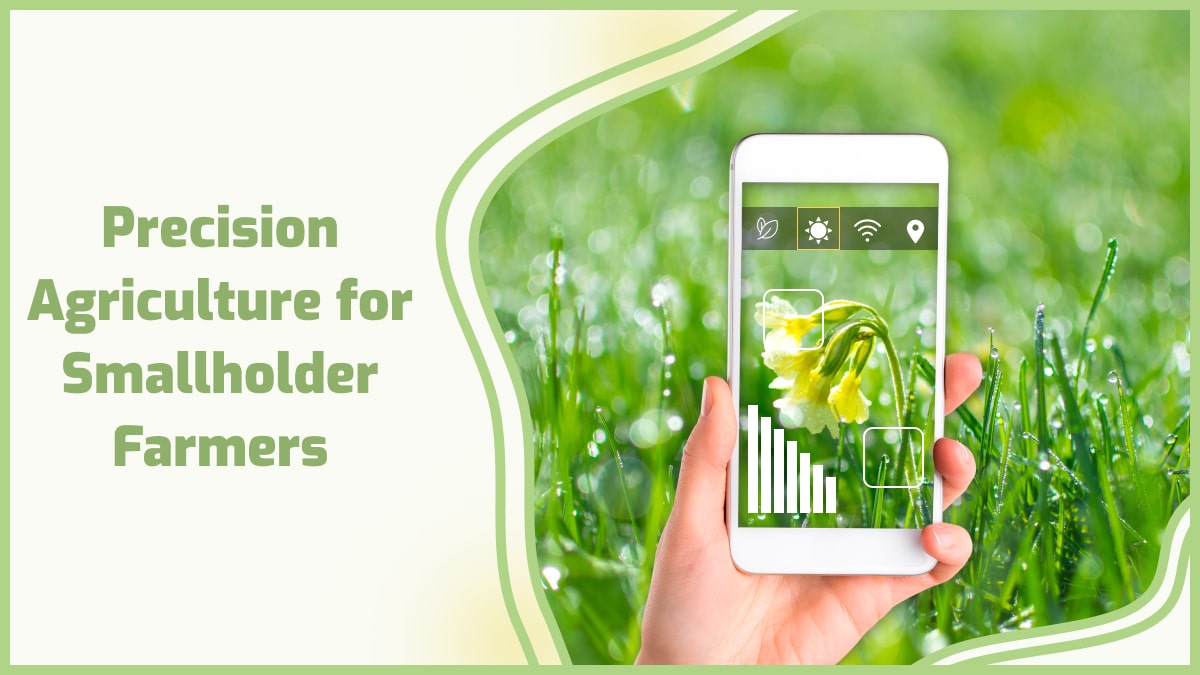 The widespread adoption of precision agriculture may be attributed to several critical technologies: mobile phones, drones, satellites, and on-site sensors. Even if not all of them are brand new, the fact that they are becoming more reasonably priced and readily available makes them more relevant to farmers everywhere. However, despite the generally optimistic view, many obstacles must be overcome before smallholder farmers can implement these solutions. The concept of “The Five A’s of Technology Access,” which consists of “availability,” “affordability,” “awareness,” “ability,” and “agency,” is a helpful framework to analyze these many difficulties.

In many areas of the world, the availability of precision agriculture technologies may be severely limited for reasons such as a deficiency in the digital infrastructure required to support such solutions (for example, power or the Internet). Although if they are accessible, many farmers may not have the financial means to purchase them. For instance, farmers may not afford a smartphone with an Internet connection, an essential prerequisite for many precision agriculture technologies.

Even when viable solutions are accessible and cost-effective, farmers could be unaware of them. It is also the case with several other technological services provided by both public and commercial organizations. There is also a possibility that farmers lack the literacy and technology abilities necessary to utilize the solutions. In a poll conducted by the GSMA, respondents from low- and middle-income countries who were familiar with mobile Internet said that this was the primary barrier preventing them from using the Internet. Finally, farmers who belong to underserved groups, such as women farmers, may not have ‘agency’ because of the many socio-cultural hurdles that stand in their way and hinder them from gaining access to technology solutions.

To overcome these obstacles, interventions are required on operational and policy levels. These involve creating solutions with the user in mind, developing business and service delivery models that are creative and inclusive, and enacting legislation making it possible to transform the sector digitally. The multifaceted nature of the obstacles highlights the need for enhanced cooperation between many stakeholders, including the governmental and commercial sectors, civil society, and the academic community, to accelerate the use of digital technology by smallholder farmers.

In this section, we will present an overview of the most critical and relevant precision agriculture technologies to promote the growing use of these technologies.

Use of mobile phones in precision agriculture

Growing mobile and internet penetration has paved the way for developing a wide variety of mobile phone-enabled services for the agricultural industry. These services are also referred to as “m-Agri services.” These incorporate ensuring that farmers have access to inputs, loans, insurance, and marketplaces where they may sell their products.

Mobile phones make it possible for farmers and agricultural professionals to communicate in both directions, provide real-time monitoring facilities, and facilitate the digitization and simple collecting of field data. Smartphones equipped with GPS may facilitate the collection of precise position data and allow the distribution of individualized information to farmers. Cell devices are a very accessible medium for spreading information and insights using other precision agriculture technologies such as satellites, on-site sensors, and Unmanned Aerial Vehicles (UAVs).

Perhaps a phone with only the most fundamental features and no “smart” functionality offers various capabilities for farmers to unlock individualized information. This makes it possible for farmers who do not have the financial means to purchase a smartphone or who live in locations with minimal or no Internet connectivity to take advantage of precision agriculture technologies.

The mobile phone-based agricultural advice services presently aiding countless farmers across the globe are the most prevalent option for precision agriculture. These services are also referred to as “digital extensions.” They can overcome many of the disadvantages that agricultural extension workers (AEWs) have, such as a lack of numbers, limited proven efficacy, and mistrust among farmers about the advice that AEWs provide. Advising services are a cost-effective strategy for enhancing agricultural results, even though the impacts of advisory services alone are minor. For instance, one research found that farmers who increased the amount of lime they applied to their crops in response to SMS-based alerts had a benefit-to-cost ratio of up to ten to one.

Use of satellites in precision agriculture

Spectral data collected by satellites may be used to build spectral index maps, which provide a visual representation of the state of the farm while advising the farmer on which areas of the farm need their attention. ARVI, NBR, and NDVI are examples of spectral indices used often.

Through mobile apps, farmers can get farm maps illustrating intra-farm variation in crop health and farm-specific advising information. Integration of satellite data with several other data sources, such as weather, on-site sensors, and agricultural records (fertilizer usage, planting dates, etc.), followed by processing using machine learning algorithms, may provide information that is even more accurate for local farmers. Several new businesses give precision agriculture technologies. These include solutions for the use of fertilizer as well as yield prediction based on satellite images.

Satellites can also provide geopositioning information. Satellite-based navaids such as GPS assist in collecting georeferenced details and identifying accurate field locations. It is necessary for the precise arrangement of seeds and herbicides and pesticides, as well as the management of the sustainable use of water and the assistance in overarching agriculture practices. The use of satellites and navigation systems together helps to characterize the variability of the farms’ soil and crops, which enables the use of cultivation methods that are both more intense and more efficient.

Use of unmanned aerial vehicles (UAVs) in precision agriculture

Combined with several other forms of technology(multiple sensors and variable rate technology), drones are utilized in successive parts of the crop growth cycle. It ranges from the soil evaluation to the planting of seeds or the spraying of crops to determining the optimal harvesting time.

They have two main applications: detecting and reducing the amount of work that must be done. Drones fitted with cameras and other sensors make it possible to conduct real-time aerial surveillance and provide an unparalleled perspective of the farm. Payloads that may be attached to drones, similar to spraying systems, might reduce the manual labor required for specific agricultural tasks, like scouting and applying herbicides, fertilizers, and insecticides.

Use of sensors and internet-of-things (IoT) in precision agriculture

Growers can base their choices on the data collected by on-site sensors, which monitor the features of their fields and crops with enhanced precision. Precision agriculture technologies like sensors are utilized in applications: precision planting and spraying, monitoring of pests and soil, smart irrigation, monitoring of yields, monitoring of the weather, and monitoring of the environment.

inter-device communication has to be governed by a set of rules for on-site sensors to be able to talk with one another and convey data. The term “network protocol” refers to this predetermined set of guidelines. Because the various wireless networks typically have varying ranges and capacities for data transmission, they are best suited for multiple applications. The technology known as Low-Power Wide-Area Networks (LPWAN) is gaining popularity for use in agricultural Internet of Things applications. LPWAN is optimal for situations where intelligent devices communicate across a considerable distance but need to transfer just a limited quantity of data. LPWAN network technologies include LoRaWAN and NB-IoT, for example.

In addition to having a large coverage area (up to 20 kilometers), these sensors also have high energy efficiency. As a result, the batteries used to power the sensors may survive for as long as 15 years. Since it does not depend on 4G or GPS, LoRaWAN has become more popular for usage in precision agriculture technologies or applications, providing reliable data transfer in addition to geolocation. It indicates that it is better suited for use in more remote places with less 4G coverage.

Precision agriculture is being helped along by technological developments such as variable rate technology (VRT), farm robots, and automation. However, smallholder farmers seem unable to implement these practices because of the high costs involved, the lack of acceptable business models, and the requirement for certain levels of technical expertise.

Farmers all over the world are turning to robotics in a multitude of types, such as weeding robots, autonomous tractors, crop monitoring bots, and harvesting robots, to cut down on the number of trips needed for farm monitoring, minimize crop damage and loss, increase farm yield, and lower their consumption of fuel. The rising cost of precision agriculture technologies such as robots is the most significant barrier to widespread use in underdeveloped nations.

E.g. in 2017, it was anticipated that robotic agricultural scouting would have an initial cost of over $9,000 and an annualized operating cost of $18 per hectare. The price of other mobile robots designed for light-duty tasks like weeding and pruning may quickly go from $15,000 to $30,000.

To make robots a more financially viable choice, however, various business models are being investigated. For example, a company’s business model can include ARaaS, which refers to “Agricultural Robots-as-a-service.” By compensating farmers for using agricultural robots, this concept provides smallholder farmers with a convenient and secure monetary choice.

There is seldom any uniformity in the factors that determine crop output throughout a field. Additionally, the application of inputs in a consistent manner does not provide for the maximum possible production or profitability. To help maximize input efficiency and, as a result, the yield and profit growth of individual fields, variable rate technology (VRT) encompass customizing and vastly differing the rates of inputs, such as fertilizers, chemicals, and seed pods, in appropriate locations throughout the field. It is done to maximize the potential of the area as a whole.

For delivery, vehicles like drones, tractors, and other farming robots are outfitted with equipment that can operate at variable rates (e.g., sprayers and spreaders). Smallholder farms often cannot justify the purchase of such equipment because of its prohibitively high cost (estimated to range between $150,000 and $250,000), as well as its complexity for farmers to understand and execute.

GeoPard is one of the autonomous precision farming technology companies that can handle any data from a georeferenced farm. We assist firms involved in crop farming in precision farming solutions while also helping them make their operations more efficient. Also, growers and crop consultants may get precision agriculture technologies from our company. API, white label solutions, and widgets are some of the other services we provide to large agribusinesses. They can introduce their solutions in just a few short weeks as a result of this.

Crop monitoring is a crucial tool that allows crop growers to detect problem areas and mitigate the risk of yield losses.

Learn more
Whats
Get the latest news
from GeoPard