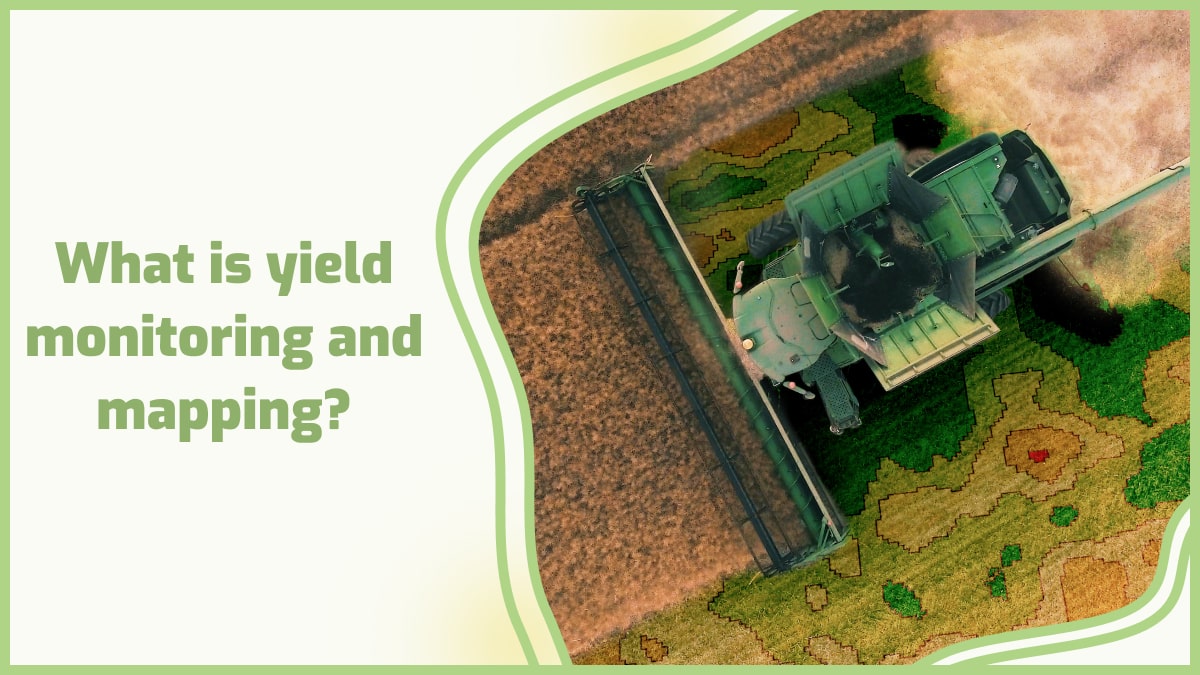 Modern agriculture and farming systems are a result of thousands of years of traditional knowledge largely supported by the rapid advancements in science and technology in recent centuries. The demand for food from the ever-increasing human population keeps on rising every year while critical issues like global warming and climate change threaten the entire sustainability of the current agricultural system. Consequently, the role of technology has never been so bigger in optimizing agricultural production.
In such context, yield monitoring and mapping are considered by many as the most valuable invention that has happened in farming recently. In this article, we’re going to understand yield-mapping and yield-monitoring and their potential in making our farms more efficient and productive.

What is yield mapping?

Initially introduced in the early 1990s, yield mapping is a precision-agriculture tool that involves the process of collecting georeferenced data about the different levels of yield as well as the characteristics like moisture-content, in different parts of the same field. During harvesting, the harvester measures these parameters using several sensors, and the measurement along with the location where the measurement was taken is recorded using geo-spatial tools. This information is used to generate a map which makes it easier for visualization by the farmers.

Furthermore, the single measurements of yield characteristics are then classified on specific zones or ranges using different colors to produce a range map or a zone classified map. The number of such classifications can be set according to the needs of the farm. For example, for generating a yield map of a field of corn that has an average production of 250 bushels per acre, classifying the map into areas each having yield of 25 bushels per acre might be appropriate. However, this depends on the level of precision required and the technology available. Standard yield maps have 5-7 color zones, which increase with increasing requirements in precision.

What are the basic components of a yield mapping or yield monitoring system?

The application of yield mapping or yield monitoring in farmlands lets farmers optimize their production by directing inputs to specific areas within the farms that need them the most. However, the working mechanism behind yield mapping or yield-monitoring requires several essential components integrated into a combined system to generate real-time and highly accurate data and maps. While the components may vary depending upon the scale of the farm and the type of the crops being monitored, the basic components of the more common grain yield-mapping system include:

Precision agriculture is the use of technology and data in farming operations so as to determine the type of farm inputs, the level/amount of those inputs, and the precise location within the farm where those inputs should be applied in order to reduce costs, increase productivity and maximize efficiency.

The yield monitoring provides variable data within a single field. This data is generated as a result of a complex interaction between several factors occurring within a farm like a farm management methods, environmental factors, and climatic factors. As a result, this data becomes a crucial asset when attempting to understand the farm for the application of other precision agricultural tools.

However, there are some hindrances when using the yield monitoring data in the overall precision agriculture systems. One such major hindrance is the maximum temporal variability among the yield data that occurs within the same crop cycle as well on crops from different years. This variability can be attributed to the complex interaction among several factors mentioned earlier. Moreover, the time when the measurements were taken can also alter the yield data and give an incomplete, if the not inaccurate representation of the farmland productivity. Besides these, wrongful calibration or system errors are other issues associated with using this data for precision agriculture. So, there are a few things that must be ensured while using yield monitoring data for precision agricultural systems:

What are the benefits of yield mapping?

Soil tillage: Both lack of tillage and excessive tillage can reduce the production of a farm and this can occur on small patches on large farms, especially if a systematic tillage operation was not carried out. Identifying these areas is critical in ensuring a better tillage operation in the next cycle.
Fertilizer Recommendations: VRF (Variable Rate Fertilization) is usually carried out by taking soil samples and soil data analytics. Yield maps can also be referred to for recommending fertilizations because it accounts for the within-field variability. However, the best results with be achieved if they both are used in combination.

Irrigation Requirements: One of the major components of yield monitoring is moisture content. As a result, yield maps are a valuable asset to making irrigation plans. For instance, low production areas in a yield map might be because of high or low irrigation in the present crop cycle. This information is necessary to identify the optimum irrigation level.

Crop Rotation: Yield mapping can give an idea of the appropriate crop rotation as a whole. By referring to yield data generated over the past at different times of the harvesting period, the exact harvest time that yields the most crops can be pinpointed.

Besides collecting yield data, some other benefits of yield-mapping are as follows:

To sum up, yield mapping of a farm provides insights of great significance to the farmer about his farm which can be used to make educated and calculated decisions to increase the overall productivity, sustainability, and profitability of the farm in many ways. However, as mentioned earlier, a single-year yield map can give a wrong impression of the actual nature of the field, and thus a systematic application of the yield mapping and monitoring process is important that helps to generate a reliable and accurate multi-year yield map. The yield map thus produced can either be for a single crop cycle or multi-crop cycles with several crop rotations.

Who can help with yield mapping?

Evidently, yield monitoring can help farmers be better at farming. These powerful tools or processes are obtained by combining software and hardware from varied technological fields like geo-informatics, sensors, digital cartography, Internet of things (IoT), processing, and analytics. While it might be overwhelming to understand the details of all the components to farmers, the end-user experience of the results can be easily visualized and understood by all. However, because of the level of precision that is required, it is important to rely on a highly capable service provider like GeoPard.

GeoPard offers a dedicated agri-solution named Yield Data that lets farmers construct field management zones on maps. It analyzes your yield data and converts it into variable-rate application maps like VRF maps for you. As mentioned earlier, it has an integrated soil sampling planning feature that makes the results more precise. Backed by a powerful processing capability, GeoPard lets you perform multi-layer analysis and visualize several attributes of the yield data like moisture, mass, volume, fuel consumption, speed, and so on. A cloud-based platform ensures that your data will never be compromised or lost which is vital to performing multiyear yield mapping of your farm.