Blog / News / Digital Agriculture and carbon credits: how to reach your goals

Digital Agriculture and carbon credits: how to reach your goals 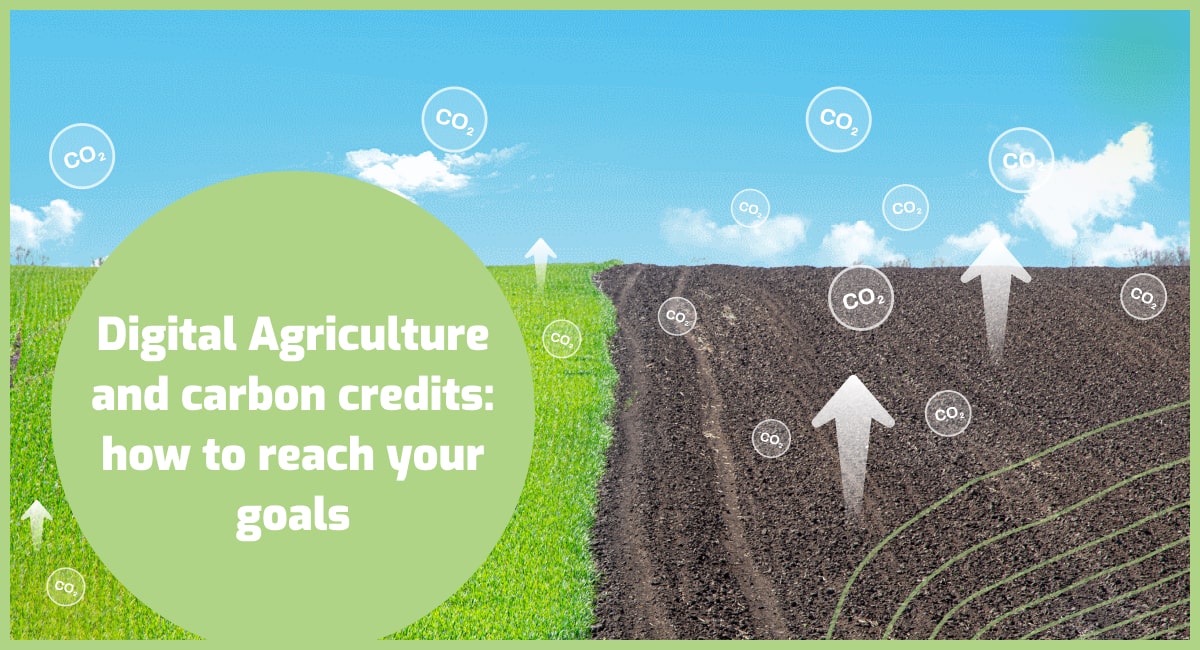 The constant release of greenhouse gasses into the environment is accountable for climatic changes. There is a need to counterbalance the reaction of these gasses for the safety of living things. Lately, digital agriculture has been discovered to play a part in climatic changes around the world. To understand the in-depth of this analogy, stay glued to this article and read to the end.

How does agriculture fit into the broader issue of climate change?

To a layman, agriculture may seem unconnected to the issue of climate change. Going by facts and discoveries, it is impossible to neutralize the impact of greenhouse gasses or relieve the depletion of the ozone layers without the involvement of agriculture. Discoveries have revealed that agricultural practices, especially soil activities, help to isolate dangerous carbon oxides such as carbon monoxides. Because of this huge feat, the soil is being referred to as a “carbon sink”. Since it consigns harmful gasses to their extinction. However, not all agricultural operations neutralize the reaction of these harmful gasses. Therefore, it becomes a matter of necessity to differentiate between operations that alleviate them and those that elevate them.

The sector of Agriculture that deals with food processing, packaging, warehouse, transportation, forestry, food consumption, and different sectors relating to industrial agriculture contributes to about 25-30℅ of greenhouse gasses emission caused by humans. And it has been estimated to increase in years to come if care is not taken. In 2018, IPCC outlined a summary of global warming. This summary showed that the habitat is at risk and also highlighted the need to neutralize the impact of global warming. Deforestation, draining wetlands, and some land activities are the major spurs for harmful gasses emission related to agriculture.

The unused potential of a soil for carbon sequestration

Soil is an important tool for carbon isolation. Research has shown that soils contain about 2000-2500 tons of carbon on average. This indicates that the proportion of carbon in the soil is about 2 or 3 times more surplus than the proportion in the plants and atmosphere. With this review, it is glaring that soil is truly a carbon sink. An exception to this is the arable soil. It has a much lower carbon content than usual soils because of the activities executed on them. Research has shown that farming operations such as cultivation on soils amount to about 30-75% loss in the carbon content of the soils. But certain measures should be put in place to ameliorate the loss of soil carbon content.

The structure of the soil also determines the sustainability of carbon in the soil. Carbon may be washed away from the soil if it’s not well protected by soil aggregates. Soil aggregates are particles of soil, which clog together tightly. But still allows inflow of water and air despite the clogging. Also, Decomposition as a result of microbial actions and respiration leads to a reduction in the carbon present in the soil. The good news is that the carbon lost can be recovered through certain activities. The activities include proper administration of soil, crop, and water. The retention of carbon by the soil plays a big part in combating climate change. It also has ecological, economical, and civic advantages. In 2019, it was estimated by the intergovernmental panel on climate change (IPCC) that there would be a reduction in the capacity of lands and soil in years to come. A recent report by IPCC shows that soil will isolate more carbon than the 2018 2019 report. The carbon content will rise to about 1.44 gigatons per annum.

Carbon credit markets: the role of agriculture in the generation of carbon credits

A carbon credit is a new term that has generated waves among agricultural and industrialists around the world. Industries buy carbon credits from farmers to subdue the effect of greenhouse gasses on the environment. Generating a soil-based carbon credit takes up a long time and extra energy. This is because some difficulties are associated with production. These difficulties include; controlling soil stock, data reliability, measurement disparities of stock, and the versatility of land.

News
Get the latest news
from GeoPard