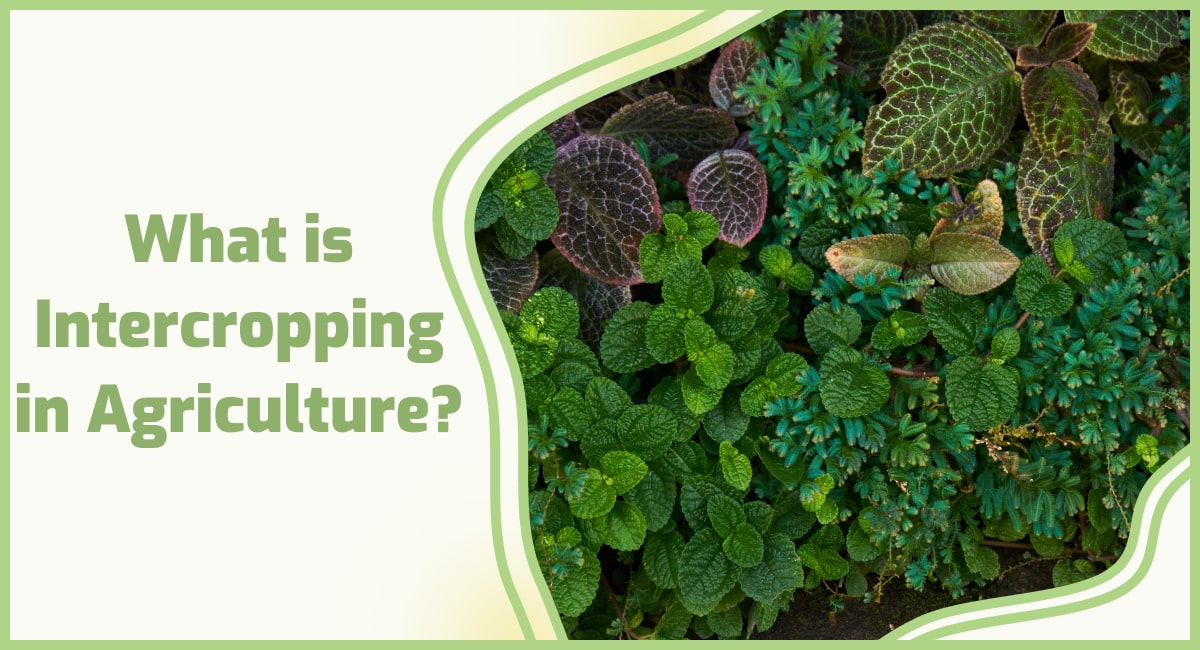 Proper management of land and effective control of pests and weeds are crucial skills for anyone who wants to succeed in Agriculture. People now seek alternative measures to inorganic substances in controlling pests and weeds. This is because some inorganic substances such as pesticides and herbicides may leave harmful remnants of crops. And this may have a resultant effect on the consumers of such foods.

Intercropping is a broad term that is dated back to the stone age. This means that it’s not a new invention. Rather, it has continued to be studied and modified by modern researchers and agriculturists. Intercropping is the planting of crops, two, three, or more on the same piece of land at the same time to effectively manage land and other resources.

The concept goes beyond selecting random crops and planting them in an unorganized arrangement. Intercropping is a strategic process that requires deep knowledge and critical analysis of plants, the pests they attract, duration of growth, nutrient demands, the types of intercropping, and more.

Factors to consider before intercropping

Crops’ Group: Crops belonging to the same group such as maize, corn, and wheat should not be grown alongside each other. Rather, different plant groups such as cereals and legumes, cereals and oil groups, cereals and vegetables, and other combinations should be planted together.

Nutrient requirements: it will be an unforgivable mistake to plant crops with the same water, sunlight, carbon dioxide, minerals, and more together. They will continue to compete against each other for these nutrients. The resultant effect of this is that some will outgrow the others, or all the plants won’t grow well.

There are many types of intercropping systems and this is mainly due to the arrangement of crops. They are listed as follows:

This method is an advanced version of row intercropping. It is more mechanized and vast, and it is usually practiced in a large-scale setting. A large piece of land that is sufficient to carry out some machine actions is highly important in this method. The difference between rows and strips is that strips are wider. The wideness of the strips makes it easy to independently use modern machines on each crop. Two, three, or more crops can be successfully grown in this kind of arrangement. This method of planting crops is very practicable and has proven to be efficient.

For a better understanding of this type of planting, we can compare it with relay races. Where the first runner starts the race and runs several times. Afterward, he passes the baton to the other player who continues the race. Relay intercropping is also very similar to this. Two or more crops are grown on the same land but not at the exact time. A crop is firstly planted, watered, and would have bloomed before another crop is planted on that land. The condition for this method is that the second plant must be able to grow despite being covered by the shad of the first plant. It means that the second plant should not need much sunlight. An example of a crop that works in this arrangement is cotton and corn.

This method of planting crops is done in places where there are a lot of trees, bushes, or shallow forests. Crops are planted between trees and bushes. This wisdom behind planting smaller crops besides the bigger crop is to grant protection to the smaller crops. The bigger crops safeguard the smaller crops against erosion, heavy wind, heavy rainfall, excessive sunlight, and other unfavorable conditions that may retard the growth of the smaller crops. The bigger crops provide shade and firm support with their roots. This method ensures the proper use of forests and forest areas. Apart from these economical uses, it will also reduce security risks by eliminating kidnappers and terrorist hideouts.

Here, two or more crops are planted on the same landscape. And there is no formal arrangement into rows or strips. Usually, the crops planted have the same duration of growth and are harvested together. This method protects the crops from pests, erosion, winds, and other negative changes in the climate.

Intercropping is highly beneficial not only to the crop growers but also to everybody in the community. It possesses economic, ecological, health, and other benefits. The following are the general intercropping benefits:

Planting many crops in rows and strips helps to manage and use the land effectively. Many crops are planted on just a piece of land. If not for intercropping, the crop grower will need to get two or more lands if he wants to plant more crops at the same time. And the land is a scarce resource that is not easily acquired, especially in the industrialized world.

Planting two or more crops together in a row helps to lessen the cost of production. The crop grower uses just a piece of land, the money spent on pesticides and herbicides is also reduced, the crops have more chances to grow well and other resources such as water are also used efficiently. Cumulatively, all these will increase the profit that would be made. Increased profit. They also give protection to cash crops, such as Trap intercropping. This protection will increase the yield of growers by reducing the loss incurred. And this will increase their profit.

Prevention of soil erosion and wind

Planting crops generally improves the ecosystem and makes the environment safe. Humans need oxygen for respiration. And plants release oxygen to the environment as by-products. Intercropping allows the planting of many more crops than monocropping does.

Intercropping provides a natural solution to many planting problems. Problems such as pest invasion, and infertility of land are being solved through this method. Planting different crops in rows and stripes makes the land more fertile. For example, if legumes are planted with cereals, the legume releases Nitrogen into the cereal and the land. The nitrogen released helps to improve the fertility of the soil. It also helps to control weeds and pests. Therefore the application of this method to farm spares the use of pesticides, herbicides, and fertilizers on the land.

Management of other natural resources

Natural resources like water, air, and energy are used effectively with this system. The energy used by humans to plow, plant, and harvest is also a resource. Intercropping helps to save the energy of not only humans but also machines used.

Although, intercropping is very beneficial to agriculture. It still has some drawbacks. Some of the disadvantages of intercropping are.

Makes cultivation and harvesting difficult: It takes a lot of effort to make the rows and stripes arrangement. The planter must be careful not to disarrange those rows while planting. Also, harvesting brings about some difficulties. The crops may be destroyed if care is not taken.

Consumes more time: Making rows, strips and even planting between trees is time-consuming. It takes a lot of time to cultivate and harvest.

In conclusion, intercropping is a very important concept in agriculture. It provides a natural solution to many agricultural problems. It helps to ensure proper management of land, water, energy, pests, weeds, energy, and other resources. Apart from these benefits, it also helps to boost the profits of farmers and also improve the ecosystem. However, intercropping is not possible without proper planning and practice. GeoPard agriculture is a company that provides farmers with the information necessary to successfully carry out planting operations. They help crop growers successfully navigate through intercropping. GeoPard agriculture provides the necessary analysis of the land to use, the variety of crops to grow, and the type of intercropping system to use on a particular land.