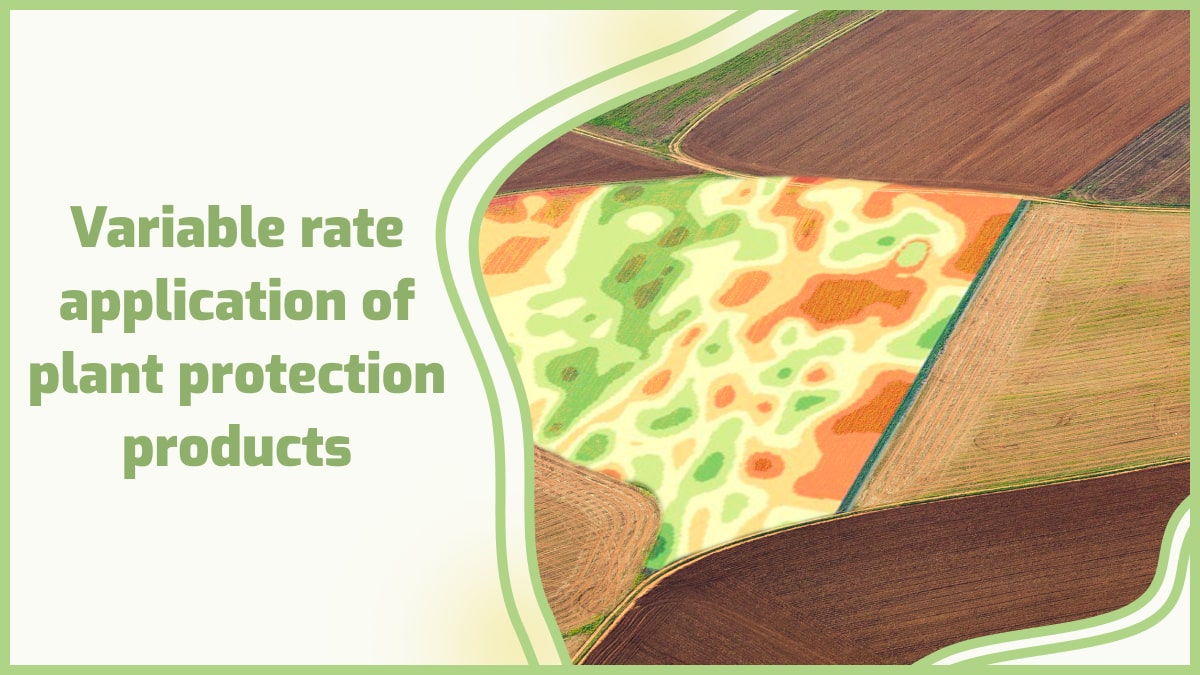 It is anticipated that by the time the year 2050 draws to a close, the population of our planet will have increased to 9 billion people. In concrete words, what does this involve with regard to the manner in which they need to be fed? As long as there is an increasing need for food, it is logical to anticipate that there will not be any additional expansion of land that is used for agricultural purposes. Because of this, it drives us to put in a higher amount of work and determination in the direction of increasing productivity and making the most effective use of resources possible.

The good news is that precision agriculture, which is a term that refers to a group of technologies, may help in the effort to achieve these requirements. In precision agriculture, the use of variable-rate technology (VRT), in particular, may help to ensure weed control while also allowing for the most efficient use of herbicides and a smaller negative impact on the environment. These benefits can be achieved without compromising crop yields or quality.

While we are discussing herbicides, it is essential to point out that the treatment of herbicide levels may alter depending on the field and the application of the variable-rate formula. This is something that has to be had in mind at all times. When the herbicide is redistributed to sections of the field where it is needed the most, considering the soil’s varying conditions, the degree of weed control that is achieved will remain consistent.

What is the variable rate of herbicide application?

It is recommended to use certain doses of herbicides over large areas; however, this recommendation does not take into account a variety of characteristics that contribute to the historically important and spatially diverse nature of traditional agriculture. It is essential to bear in mind that a significant amount of the costs connected with crop production are attributable to the use of herbicides for the purpose of weed control. This leads to large financial losses whenever herbicides are employed at a steady rate (whether these losses are direct or indirect).

In addition, herbicides that find their way into rivers and groundwater may be the source of environmental pollution. With the use of technologies like variable rate application (VRA) and other precision agriculture practices, it is possible that these problems might be mitigated to some extent. VRA takes into consideration a number of various variables while administering herbicides, including the location, area, type of infestation, soil conditions, and weed density in herbicide application, among other things.

As a direct consequence of this, we are better able to eradicate weeds and reduce our impact on the surrounding environment. The removal of overdoses and underdoses is facilitated by the variable-rate spraying of herbicides, which is achieved by integrating the sprayer system with the variable rate control system.

For the purpose of providing you with information, the primary components of the variable rate control system may include, but are not limited to, a terminal or display that is capable of supporting VR spraying, GPS equipment, and variable rate nozzle control (section control or each nozzle rate control).

What is the application of herbicides?

Here we are going to discuss different applications of herbicides:

How is the herbicide application rate calculated?

In order to achieve successful weed control, it is necessary to apply herbicides in a homogenous manner and in the appropriate amounts. A very little variation in the pace at which herbicides, pesticides, or even other chemicals are applied might result in inadequate pest control, harm to the crop or the environment, and ultimately a loss of time, energy, and money. There are three different ways that herbicide rates might be expressed.

When it comes to applying them, herbicides are either spread out uniformly across the whole of the field surface in a process known as “broadcasting,” or they are administered in thin strips of herbicide that are concentrated over the row (in bands). Keep in mind that the space in between the rows in the latter scenario is not addressed in any way.

In the meanwhile, the transmission rate of the application should be the same as that of the band and the broadcast regions. The needed quantity of herbicide may be reduced by as much as two-thirds if the application is banded across the row and if mechanical cultivation is used to control the weeds in the center of the row.

For instance, whereas applying herbicide in 10-inch bands across 30-inch rows requires just one pound of herbicide, using herbicide in a broadcast application at a rate of three pounds per acre necessitates using three pounds of herbicide for each crop acre area. In addition, you may calculate the total quantity necessary for the band application by multiplying the broadcast rate by the bandwidth and then dividing the result by the row width.

Precision agriculture makes use of a wide variety of technologies, including variable-rate herbicide treatments. These technologies include anything from satellites and drones to artificial intelligence and hyperspectral imaging. It is essential to have a solid understanding of the wide range of applications for the technology being deployed. The administration of herbicides at varying rates is a common agricultural operation that may be entirely automated with the use of suitable variable-rate spraying technology (VRT). The following is an instruction for spraying herbicides using a VRT.

The phrase “management zones” refers to discrete portions of a field in which various kinds of materials need to be treated at the appropriate times. It is required to determine which zones the equipment should apply certain materials in order to perform precision agriculture and employ variable rate herbicide application. Both of these practices need the usage of variable rate herbicide application. It is vital to first create acceptable management zones before applying herbicides using technology that enables variable-rate spraying or application. This is because variable-rate spraying or application can only be made effectively when proper management zones are in place. In addition to this, it is of the utmost importance to enter these particulars as precisely as possible into the VRA system.

The use of sensors or maps in the application of variable-rate herbicides are both viable options; however, it is up to you to choose the strategy that is going to work best in your specific environment. Another element that might potentially have an influence is the limits of the technology that is used in the process of applying variable rates. In order to use map-based VRT, you will first need to create a map of the terrain (either field potential maps, bare soil maps, or your very own unique index), and then you will need to input that map into the system. Field potential maps and bare soil maps are two examples of the types of maps that can be used.

On the other hand, the approach based on sensors is able to instantly detect data that is used to aid it in selecting the appropriate herbicide to apply. It may, for instance, identify the status of the crop before making a judgment about what to do with it.

What data or imagery should be used

The very last thing that has to be done is to figure out what types of data the sensors should gather and what kinds of photographs should be utilized in the mapping. A large number of VRA solutions identify information about the scene by making use of drones or other photography equipment, such as a sensor that is integrated into the app’s physical hardware. Aside from that, additional information that is crucial for the application of herbicides includes the conditions of the soil and the components that are in it, the sort of crop that is being grown, the average temperature, and the speed at which the vehicle is traveling. By using the technologies that allow for variable rate spraying, one is able to get all of this information as well as additional specifics.

In conclusion, the primary function of the variable rate herbicide application technology is to detect the essential information about the intended landscape and then make judgments based on the information that has been recovered from the landscape. The decisions that are made by variable-rate spraying technology systems help determine which kinds of herbicides should be employed in which kinds of land areas at what kinds of rates. These decisions may help prevent the spread of weeds and other unwanted plant life.