Blog / Whats / Why is biodiversity important in agriculture?

Why is biodiversity important in agriculture? 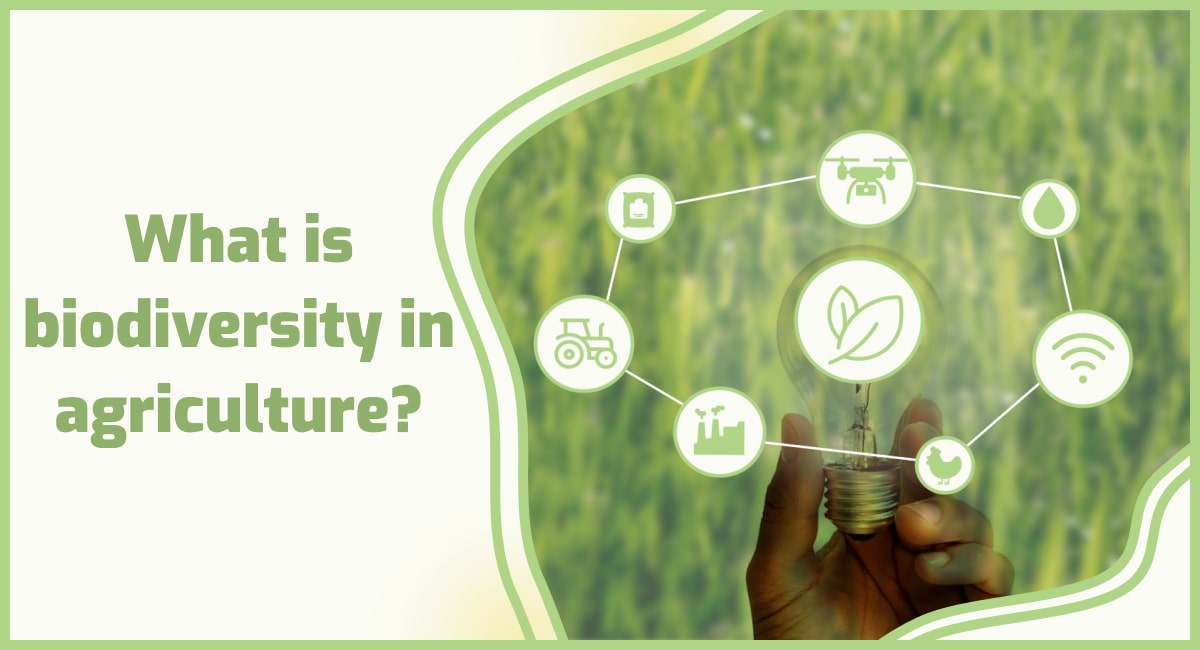 Biodiversity examples include the variety of micro-organisms, plants, and animals that are paramount to sustaining critical elements of the agriculture ecosystem. The given biodiversity is the bottom line that maintains the sustainable creation of agricultural products.

Biodiversity alludes to different kinds of life on Earth. It means all living creatures that come inside our world, such as a wide range of animals and plants. Moreover, micro-organisms and fungi are also part of biodiversity. These organisms make united efforts in ecosystems to keep balance and support life. So, when we refer to biodiversity, it encompasses all living creatures. The concept is by no means limited to rare or endangered living things that we often attribute.

Unfortunately, humans are bent on shrinking biodiversity owing to an ever-increasing population. The speed at which human beings are consuming resources is unprecedented in human history. In this regard, the intergovernmental platform on biodiversity/ecosystem services published the Global Assessment Report in 2019. It claimed that around one million plant and animal species are at risk of extinction, which is the highest number recorded in human history.

Why is biodiversity important to an ecosystem?

Biodiversity is worth being valued, ranging from utilitarian to intrinsic reasons. From the utilitarian perspective, humans fulfill their basic needs through biodiversity in the form of fuel, food, shelter, and medicine. Plus, biodiversity is crucial in various domains, such as seed dispersal, pollination, and water purification. It is also helpful in regulating climate and controlling agricultural pests.

For instance, plants are the reason behind the presence of oxygen. Similarly, pollination is possible because of the activity performed by bees. When it comes to protecting people living in the coastal region from tsunamis and cyclones, mangrove swamps and coral reefs extend robust protection.

Along similar lines, hardwood trees that eradicate carbon dioxide count on seeds that spider monkeys disperse. In our ecosystem, there are plenty of such interactions taking place. We have our Earth sustainable because of the balanced system.

Conversely, intrinsic value implies the inherent worth of biodiversity. At the philosophical level, it signifies that every living being deserves the right to live. So, biodiversity value can be perceived from the perspective of the relationships we build and seek with one another and nature.

What is agricultural biodiversity?

Significance of biodiversity in agriculture?

Biodiversity in agriculture is significant on many fronts. Agrodiversity paves the way for food products like rice, wheat, and vegetables and also provides materials like cotton, wood, and fuel. It assists with giving food security, nutrition, and prosperity for plants and animals. Moreover, it fills in as a safety net to families becoming helpless during the crisis, turns out a revenue chance of pay to unfortunate farmers, and aids in sustaining productive agrarian biological systems.

Apart from that, our ecosystems also get invaluable services from agricultural diversity, including soil and water conservation, conservation of microbes, and maintenance of soil fertility. Undoubtedly, all these elements are significant as far as human survival is concerned because they ensure the continual process of food production.

Worldwide, biodiversity is under threat, which is rooted fundamentally in the potential extinction of countless species. With little room to think otherwise, fragility is inherent in our ecosystems and species that exist inside them. As a result, biodiversity, or more specifically biodiversity in agriculture, is subjected to far-reaching consequences in case of even small changes.

When it comes to the causes of the loss of biodiversity in agriculture, we know that the list is endless. However, the ever-increasing population of Homo sapiens is only adding insult to the injury. We upset the natural balance of biodiversity to the point of no return in a short period, given the relatively short presence of humans on Earth. In particular, our excessive exploitation of natural resources, deforestation, and transforming land utilization damaged the planet incomparably.

More disturbingly, the way we are urbanizing our natural habitats is ruthless, at the very least. While we have encroached our land with factories and road infrastructure, we have also disturbed marine biodiversity by mining, drilling, and overfishing. Although unchecked urbanization favors generalist species, those living organisms who cannot put up with pollution or are resistant to ecological disturbance are at the risk of extinction.

The changes in the land as a result of deforestation and soil pollution harm our ecosystems. For instance, butterflies can go extinct, given that the new urban conditions would not suit them as they thrive in a confined territory with certain conditions.

How does climate change affect biodiversity?

Biodiversity in agriculture has also been suffering due to changing precipitation patterns alongside higher temperatures and greater frequency of extreme events. Climate change, hence, has a direct toll on food security. Healthy diets like vegetable and fruit production are bearing the brunt of climate change, in particular.

Similarly, rising greenhouse gases are also posing a negative effect on livestock. Biogeochemistry, the composition of species, and overall productivity in herbivores are on a downward trajectory. It is because animals have to rely on the forage degraded by climate change.

Agriculture utilizes more contributions of natural resources per unit of significant worth added compared to any other sector such as construction, manufacturing, and transportation. On the other hand, even with these oversized contributions, the existing incremental rate of development in agricultural production refers to only a few percent each year.

Often, climate change poses a combination of linked challenges for farmers. Warming climate not only hurts farmers through drought, but it also affects their crops – if crop monitoring is not leveraged – through insect pests due to the hot temperature. Likewise, food systems are also required to deal with tradeoffs presented by climate change. E.g., although the growth of crops is amplified by carbon dioxide, the acidic gas can diminish the nutritional element of the crops.

Let us see how we can improve biodiversity in agriculture by following the below practices.

One approach to diminish soil disturbance is conservation tillage. Essentially, it takes away the possibility of soil erosion as the practice builds up crop residues on the surface. The idea behind it is the promotion of biodiversity in agriculture by building organic matter under the soil. In recent years, the conservation tillage approach has become popular on farms.

Preventing soil erosion and water overflow is possible with wide strips of land that we call buffer strips. These are often grasslands that help promote biodiversity in the form of habitat for birds and animals. These are helpful, especially in the areas containing hilly topography.

Cover crops are those crops that help cover the soil. Farmers plant these crops purely for this reason. Crops, such as radishes and rye, tend to assist in conserving soil, averting soil erosion, and offering innumerable advantages to the soil for forthcoming crops. Insects and birds that are a substantial part of biodiversity in agriculture also get habitat because of these cover crops. If the crop production is not producing enough yield, scouting tools can help detect stress in the field.

The world has moved beyond qualitative analysis, and it operates far better with quantitative analysis now. Reckoning with the changing dynamics, GeoPard offers multiple agriculture solutions while keeping in view the biodiversity in agriculture. These solutions range from variation rate application (VRA) maps to field benchmarks. Not only has that, but the soil data analytics option is also one of them – the tool shows the soil properties with a detailed map and provides the required prescription, enabling soil protection and yield growth.

What’s more, do you wonder how soil properties and yield are influenced by the topography? In this regard, 3D maps can prove fruitful as it generates maps in a few seconds with easy-to-understand visual. As a result, you can better manage individual land parcels.