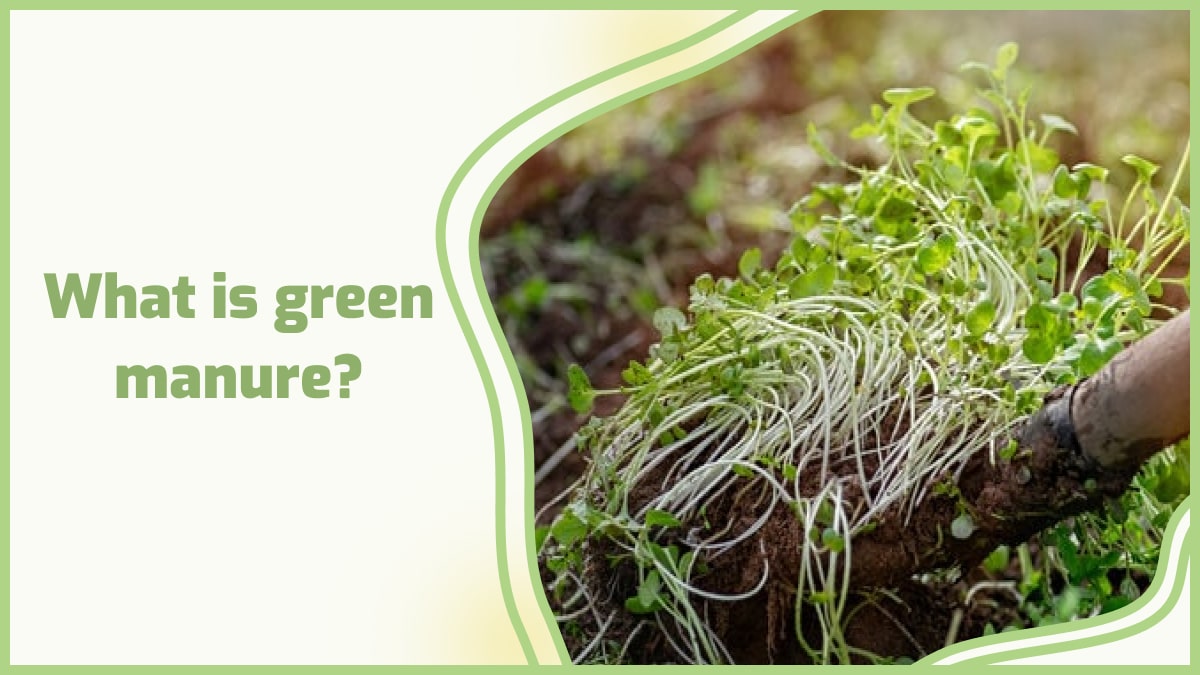 One of the geographical protective measures in the farming industry is the use of green manure. This is a result of achieving sustainability by conserving supply and fulfilling food demand. As a result of looking for efficient and more sustainable ways to produce, present-day farmers experience a vast number of issues of which one of which is soil fertility conservation without making use of chemicals and the most obtainable solution is green manure crops.

It has been discovered that this method has a more lasting impact on the soil than in ancient times. It is a more priceless method for farmers who want to minimize the adoption of damaging chemicals for the fertility of the soil.

Green manure cover crops are crops produced mainly for nurturing the fertility of the soil and structure not limiting other properties. They are usually absorbed into the soil, be it directly or after removing and composting. They have been used for a while in the United Kingdom by non-organic farm producers but have been desired and accepted by organic farm producers. This in return has increased their delivery and productivity.

Green manure crops are highly advantageous to the soil and future crops. They are grown mainly for the benefits they offer and not for grazing or harvesting. They are widely used for upgrading the soil, weed control, nutrients, and various organic matter.

Green manure is best left on the exterior of the soil and allowed to absorb its way into the soil rather than harvested or grazed with the farm produce. It is integrated and rotated thereby adding remarkable benefits at a lower cost addition. The advert for green manures has been in existence for years but they were replaced with the invention of chemical fertilizers. As a result of a new understanding, we have realized that green manure crops are highly advantageous in terms of the nutrients that they add back to the soil.

Apart from feeding the soil which in turn feeds the plant instead of the other way round, the green manure crop feeds all soil organisms and also increases the fertility of the soil. Genetically fertile soil produces healthy plants that are able to fight diseases and pests in addition, healthy soil is more resistant to drought.

Why use green manures?

Green manures are products produced within a rotation with the purpose of:

1. Enhancing the structure of the soil and their organic matter
It is very popular to rear green manures, especially for the aim of land conversion to upgrade the fertility of the soil and structure.
2. For weed control
It is an efficient tool for the control of weeds. Green manure in the middle of crops will choke weed seedlings and with the required cultivation, this will reduce the weed burden.
3. Damage prevention thereby supplying ground cover to the structure of the soil.
4. Supplying supplements for the next crop
5. Leach prevention of dissoluble supplements from the soil
6. Making use of crop supplements from lower soil profiles

The preparation of the soil for the following crops is the main aim of ensuring green manure crops. They absorb supplements from the soil and accumulate them. During harvest time, these crops are not tampered with or removed from the land as this would be the removal of the supplements but they are cultivated into the soil while they are still green. When they are returned back into the soil, the plants gradually decay and in turn release supplements for the following crops.

Concurrently, green manure is seen as a medium of food for countless soil microbes and organisms. The health of the soil is very crucial due to unlimited soil fauna. A good structure of the soil is built as a result of their motion and the feeding on the organic matter. This allows for soil distribution. Green manures are an easy way to achieve outstanding results but there are quite a number of things to bear in mind.

Green manure crops need to be buried before the maturity of plants. This enables the decomposition of the plants faster and easier as they are not too woody. This in turn prevents the seeds from being released which gets rid of undesired regrowth of the green manure when the actual crops are planted. It is not advisable to bury green manure too deep into the soil. The best way to carry it out is to turn plants a maximum of 15cm or at most 6 inches into the ground. This is for the fact that the soil microbes are more active in the upper soil layer just below the surface, thereby increasing the decomposition process.

It is not recommended to use green manure as the main crop especially if they are from the same specimen. The aim is to plant crops that are not similar this is because crops from the same specimen make use of the same supplements and they tend to accommodate the same pests and diseases. It is advisable to allow the soil to rest for about 20 days after use, this gives room for the organic material to properly decompose thereby offering the best conditions for planting the following crop.

There are mainly two types

1. Legumes (clover family)
They are developed on their roots with the aid of a special bacteria nodule which has the ability to absorb nitrogen from the air and turn it into a medium that can be used by plants. This is known as nitrogen fixating and it is assisted by a treatment method to help legumes work. This treatment method is known as inoculant and it is available at garden centers in powder form it will improve yields drastically. It can then be made use of by crops that are produced after the legume has been harvested and added to the soil.

2. Non-legumes
They do not fix nitrogen however they produce useful amounts of organic matter and keep the nutrients that would have been lost. They grow very quickly and can be added within spaces in production during the growing season. There are green manures that work well for Northern Ireland, however, there are some that are not going to be successful in Northern Ireland as a result of soil and climatic factors.

They are liable to clubroot and this can increase the level of infection. They should not be planted close to brassica crops. The method of green manure can be adopted easily on large farmlands and also in small home gardens. The most important factors are to know the benefits attached to sowing green manure crops. The following section points out the benefits

The benefits of green manure cover crops include

There are certain green manures with penetrative roots that are deep and as they grow the soil opens up. Heavy soils benefit largely as it creates room for drainage to happen freely. These green manures allow organic matter to be stored up in the soil and for lighter soils, the remnants of the soil can better hold water together thereby leaving the organic matter in the soil.

With the rapid growth of green manures, their very leafy growth enables the suppression of weeds. The more growth, the more weeds are suppressed and increase the retention of moisture in the soil. It is good to make sure that the soil is freed from weeds. This is highly important especially when the grounds are left fallow mostly during winter

Various things come to play that bring about certain minerals that can not be used by plants and leguminous green manures that attract nitrogen from the air and add it to the root nodules making it available to the following crop when dug. There are certain soil bacteria that are needed to be present but are only available in healthy soil. One of which is Nitrogen, plants need it as it gives room for healthy stem and leaf growth.

4. Protection of the soil

Green manures aid the soil from being crushed as a result of heavy rainfall, thereby preventing the loss of nutrients and keeping the soil together. During summer, it will also prevent the soil from the harsh weather conditions of the sun and wind making it dry easily.

The damp cover of green manures serves as a home for frogs and other natural predators that live on pests such as snails and slugs. Certain insects are also confused when green manure is planted in the middle of food crops, especially carrot fly flies.

Certain soils need to be left for a while to recover from continuous planting and cultivation. Green manure aids the prolific structure of the soil with little or no effort. They can be left on the soil for a year or more depending but in the case of most home gardens, this ct is carried out during winter.

Green manure cover crops are permitted to grow and then occasionally cut down before flowering so as to avert seeds from growing. The plant material can be compounded in a compost bin. They can be left to grow and later buried and left for decomposition. It is advisable to give a thirty days spacing before the following crop. This can be very tasking and a lot of care must be put in place so planting is not carried out too early as certain green manures such as Grazing Forage Rye emancipates a certain chemical that prevents seed development. The dug systems enable the use of the green manures, it is best to eradicate the crop. The foliage is allowed to deteriorate on the ground. One has to be careful with perennial green manures and Grazing Forage Rye as they tend to re-grow even after being cut down.

Green manure cover crops are created by adding plant materials into the soil while it is still green. When they decay, they add nutrients to the soil with organic matter. It is necessary that a lot of time is allocated between when the green manure decomposes and when it is allowed into the soil following the new crop. The adoption of green manures as a means of crop rotation enables the maintenance of the fertility of the soil. There are a vast number of benefits attached to the use of green manures. They include protection of the soil, fertilization of the soil, and improving the organic content all of which are important to get rid of the threat of the land degrading.

More healthy soil means an increase in the production of food as a result of less chemical and tillage usage. Making use of fewer chemical-based fertilizers and heavy-duty machines during crop cultivation has a huge impact on the depletion of air and water pollution. Therefore, the growth of green manure crops helps farmers have an organic farm.